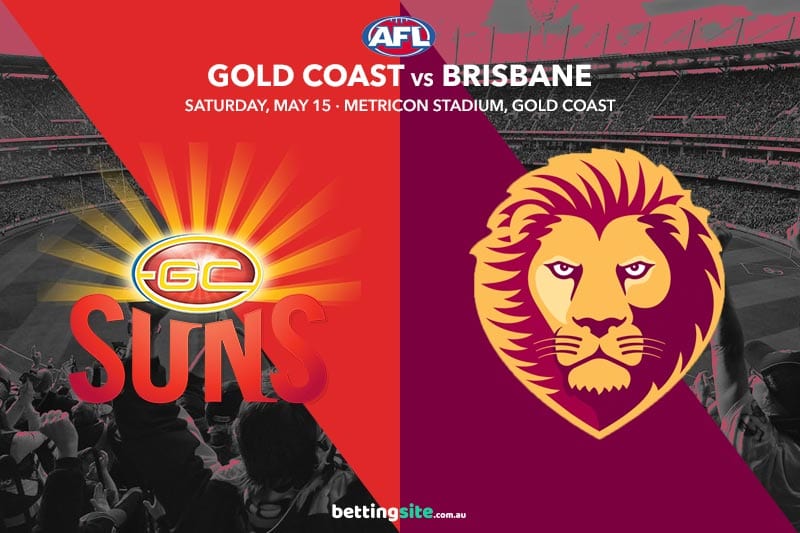 An injury ravaged Gold Coast Suns side will play host to the red-hot Brisbane Lions on Saturday afternoon for QClash 20 in Round 9 of the 2021 AFL season.

The Suns looked like bringing up their third win in a row last week, but they were overrun by St Kilda in the final quarter. Nick Holman (concussion) and Touk Miller (suspension) are set to miss the match against their rivals from up the highway.

Brisbane look to have come through their 24-point win over Fremantle relatively unscathed. They will be looking to bring up their fifth win in a row on Saturday, and their fifth successive win over the Suns.

Online bookmakers have the Suns as $3.50 outsiders for this matchup, whilst the Lions are dominant favourites at $1.32 to continue their climb up the AFL ladder.

The Brisbane Lions entered QClash 20 as red-hot favourites, and deservedly so considering their recent form and the Suns’ worrying injury list. With little value in head-to-head markets, Brisbane by 40+ points looks to be the play. The Lions have beaten the Suns by 40+ in each of their last three meetings, so the $3.30 available for the big margin should be snapped up.

With a relatively inexperienced side, the Suns may be a bit vulnerable down back. The total points line sits at 160.5, and that looks achievable now that Charlie Cameron, Joe Daniher and Eric Hipwood are starting to click in the Brisbane forward line. We are expecting this to be a high-scoring affair between the two Queensland sides, so the overs is well and truly in play.

If the Suns are to have any chance, they will need a big haul from their key forward Ben King while at the same time nullifying what Harris Andrews gives the Lions from their last line of defence. Averaging eight marks per game this season, Andrews is one of the best key defenders in the game and is critical to how the Lions launch counterattacks. If King can have an effect on the way Andrews plays on Saturday, it will give the Suns at least a fighting chance.

The enigma that is Charlie Cameron has been threatening to blow a game to pieces in recent weeks, and we think he might do just that on Saturday afternoon. He has 10 goals from his past three matches, but it could have been much more if not for some wayward finishing. Cameron has 20 goals from nine matches against the Suns but has only kicked four or more on two occasions. We think we will improve on that record this weekend.

Hugh McCluggage to get 30+ disposals

Hugh McCluggage’s last month of football has arguably been the best of his career to date. He has averaged a tick over 30 disposals per game over the past four weeks, and the Lions have remained undefeated in that time. Despite picking up ‘only’ 27 touches last week against Fremantle, we expect McCluggage to be back on the right side of 30 against the Suns at Metricon Stadium.

The Suns will be without plenty of their best 22, whilst the Lions are at near full strength minus Lachie Neale and Cam Rayner. Despite the absence of last year’s Brownlow Medal winner, the Lions midfield is still star-studded and will provide their forwards with plenty of opportunities throughout Saturday afternoon. Expect Charlie Cameron and Hugh McCluggage to be the ones fighting it out for the Marcus Ashcroft Medal, awarded to the best player on the field in the QClash.