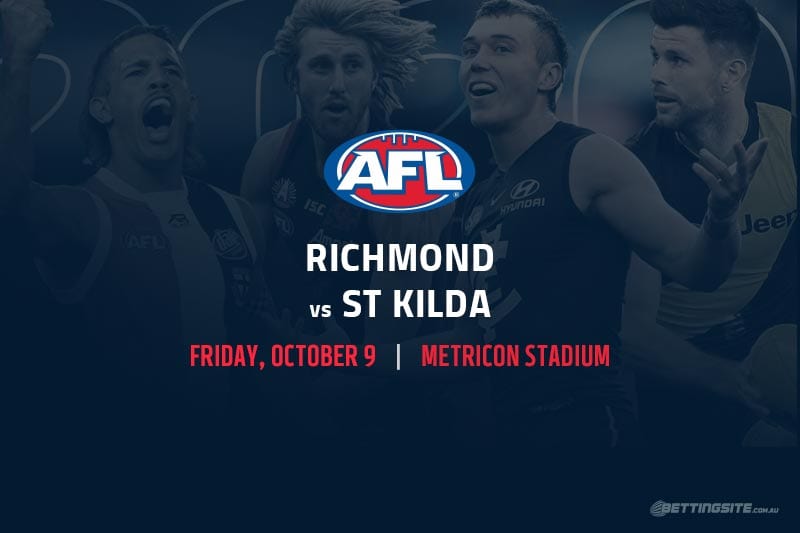 Can Brett Ratten’s St Kilda Saints pull off an almighty upset and send Richmond home in straight sets, or will Damian Hardwick’s Tigers regain their balance?

The Tigers have won six out of six at Metricon Stadium this season, so it was no surprise when they chose to play this semi-final at the venue closest to their Gold Coast hub.

St Kilda will lose three key players from last week’s side, as Paddy Ryder suffered a hamstring injury, Ben Long has been suspended and Jake Carlisle is leaving the hub for the birth of his child.

Josh Battle will push for selection after missing with a foot injury last week, while former Hawthorn premiership player Shane Savage will raise his hand for the Saints.

Tom Lynch is the big inclusion for the Richmond Tigers as the key forward finally makes his return from his hamstring issue.

The ruck duo of Rowan Marshall and Paddy Ryder has torn teams apart in 2020, but Marshall will ride solo this Friday. The mobile big-man is a proven accumulator of the football, surpassing 15 touches in eight games this season including three of the four games Ryder missed this year. Toby Nankervis gave away four free kicks against Brisbane and will struggle to match Marshall around the ground.

In the 12 finals Jack Riewoldt has played throughout his 280-game career, the spearhead forward has kicked 27 goals at an average of well over two per game. The St Kilda backline can mix and match its height to tackle many players, but the Tigers combination of Riewoldt and Lynch will cause them headaches with Carlisle out. Jumping Jack loves playing the Saints and will be a huge target this Friday.

Many pundits are tipping a blowout, but the Saints will put up a fight despite their casualties. Ryder did not play when St Kilda beat Richmond earlier in the season, so it appears Ratten already has a formula for stopping the Tigers. We expect a slim win to Richmond, but do not be surprised if the Saints steal a victory.