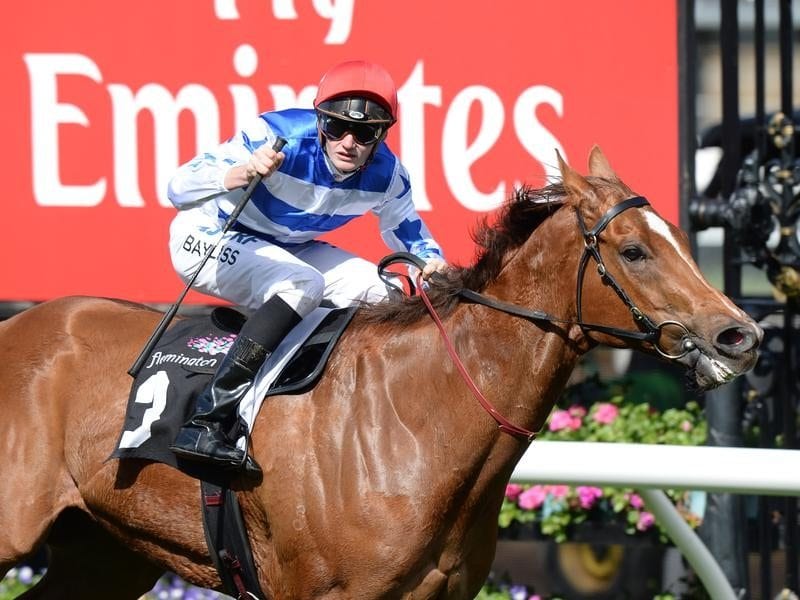 Redkirk Warrior has taken a serious step towards an Everest start after winning at Flemington.

Newmarket Handicap winner Redkirk Warrior has put his credentials for The Everest on show with a convincing first-up win in the Bobbie Lewis Quality at Flemington.

The gelding’s 2-1/2-length victory over Perth Group One winner Scales Of Justice in Saturday’s Group Two 1200m straight sprint was no surprise to his co-trainer David Hayes who expects he can be a force in $10 million The Everest next month in Sydney.

The Lindsay Park stable has one confirmed slot for The Everest through Sydney casino The Star, with Redkirk Warrior and dual Group One winner Vega Magic the leading contenders for the position.

“The Star has the choice and I’ll let them choose,” Hayes said.

“I’ve put two very nice ones under their nose and The Star will choose in the next 24 hours.

“I’ve been recommending this horse to them right through and Vega Magic confused them a little bit. Really it’s up to them.”

Hayes is planning for both those sprinters to run in The Everest though, with a number of the other slot holders yet to declare their representative for the rich 1200m race at Randwick on October 14.

“The back-up vocals is pretty good, isn’t it.”

Hayes said the stable felt Redkirk Warrior was going better leading into Saturday than before he won the Newmarket first-up last preparation.

“If he gets the right conditions now in Sydney it will take a very good one to beat him,” he said.

He said there wasn’t much between the pair.

“When it rains it pours,” he said.

“They’re the two best sprinters I’ve had for a long time.”

Redkirk Warrior ($4) sat on the speed and sprinted clear when Regan Bayliss asked him to go.

Scales Of Justice ($4.80) ran about at the business end of the race in his first start up the straight, first ducking out to the right when he was making his run before ducking in and then regrouping to finish second.

Land of Plenty ($20) was another three quarters of a length away third.