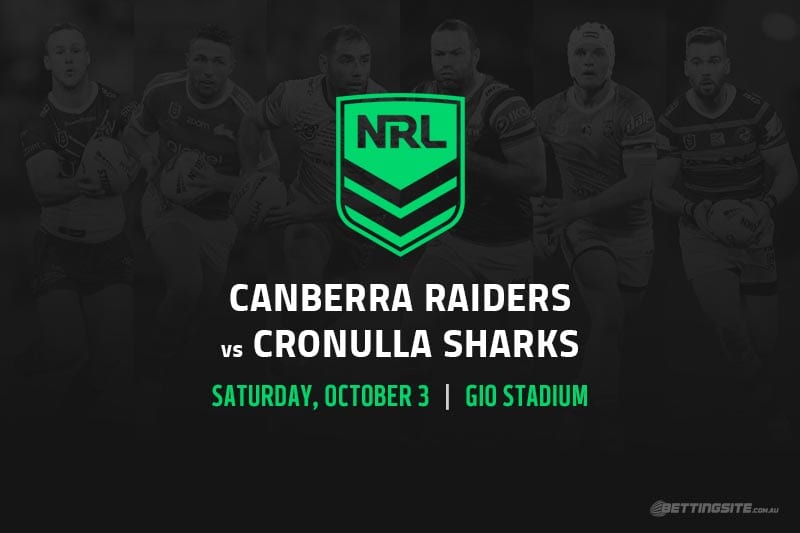 The one mismatch historically under the McIntyre System has been the fifth-versus-eighth game, with only the 2017 Cowboys getting the victory against their higher-ranked opponent.

While Cronulla Sharks fans everywhere would love to see a similar run, the chances of that happening are about the same as hell freezing over.

The Sharkies are 0-8 against the other top-eight sides this season and lost to the ‘Baby Raiders’ just last week, so what will the ‘Grownup Raiders’ do to them?

All the form suggests a comfortable 13+ win for the Canberra Raiders at the short $1.83 price, but there is one curious stat in Cronulla’s favour.

The Sharks have won six of their last seven starts in Canberra, and the one blip was a two-point defeat where they managed to score more tries than their opponent.

Cronulla started the betting as $4.50 outsiders and have since drifted to $5, so absolutely nobody is giving them a chance.

Last week the Sharks defence struggled against playmakers taking the ball to the line, which resulted in Tom Starling having a night out and even Matt Frawley breaking the line for a try.

Jack Wighton has three doubles in his last five starts, so the $8.50 for him to it again is a fantastic price.

The over 42.5 also looks the way to go because Cronulla games have typically seen them score and concede plenty.

Some 13 of their 18 games since the competition resumption saw the combined score cross the 42.5 mark, so put that in any multi.

Cronulla wingers Sione Katoa and Ronaldo Mulitalo are $11 and $13 respectively to score the first try, which is better value than they usually get, so either of those guys is a good bet if you think the Sharks will score first.

A same-game multi of Raiders 13+ with Jack Wighton and Josh Papalii to score anytime at $16 is also worth a crack.

Both men crossed the stripe in Canberra’s preliminary final win at the same ground last year, so why not have a Stuart Diver on it?

Best bets for Raiders vs Sharks