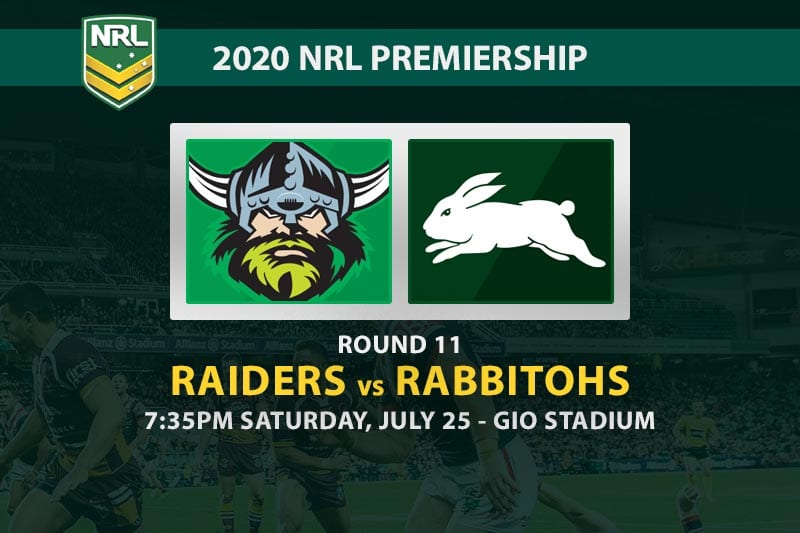 The South Sydney Rabbitohs‘ season already hangs on the edge of a cliff after losing last round to Newcastle, but long-term injuries to James Roberts and Ethan Lowe make a charge to the finals even more difficult.

While they sit in eighth place at the halfway point of the season and have Latrell Mitchell to return, all of a sudden they have to put a lot of faith in players like Bayley Sironen, Corey Allan and a bench that is light on impact.

Following on from their remarkable win over the Roosters, the Canberra Raiders return to GIO Stadium as the $1.54 favourites with Souths at the $2.75 mark.

It looks as though the weather will play a part in this one. With forecasts of about six degrees and rain come kickoff, it just feels like everything is going Canberra’s way.

Adding to that, John Bateman returns to the reserves list for the Raiders and could make his way into the lineup by Saturday evening for his first game of 2020.

The over/under line for this game is 39.5, and you’d be brave to tip overs considering the forecast.

The Raiders at the 1-12 margin also feels like a fait accompli at $3.10, which is remarkable when 10 days ago many wrote off their campaign with the loss of Josh Hodgson.

Newcastle had considerable success down the right edge of Souths last week, with Enari Tuala, Kurt Mann and Bradman Best all scoring.

The aforementioned Allan is an uncertain defender on that flank for the Bunnies, and you know Ricky Stuart will have his team ready to exploit it.

Nick Cotric on that wing is paying $8.50 for first tryscorer, while Jarrod Croker is also worth a look at $15.

Jack Wighton at $19 should be given a thought as well, as he has already scored the first on two separate occasions in 2020.

Best bets for Raiders vs Rabbitohs