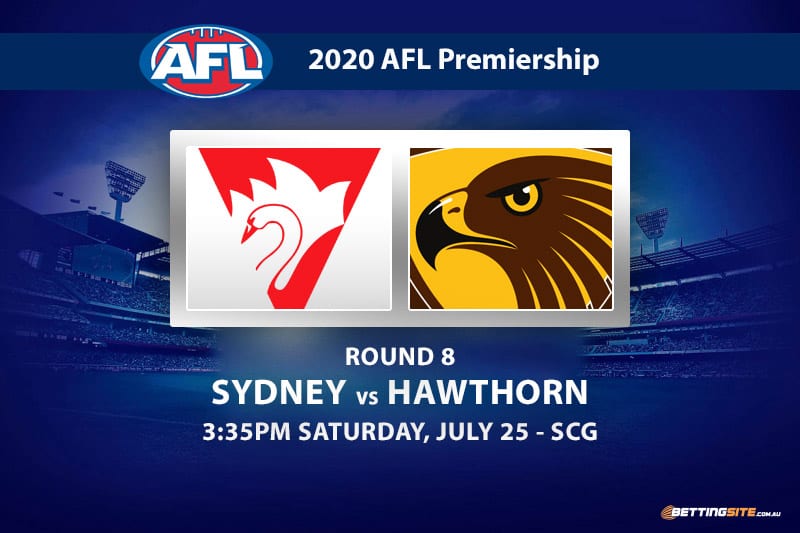 The Sydney Swans will host the Hawthorn Hawks this Saturday afternoon at the SGC as both teams look to get their seasons back on track.

Matches between these two sides are often tight and unpredictable, and we expect more of the same even though they are at wrong end of the ladder in 2020.

John Longmire and Alastair Clarkson have been coaching against each other since 2011, with Hawthorn holding a 10-6 advantage in that time.

The Hawks went down embarrassingly to the Demons last round, where they looked uninspired with the footy and struggled to retain the ball inside 50.

The Swans look a little better in round seven and kicked nine goals in their loss to the Gold Coast Suns, and their forward line could improve significantly if they bring back Sam Reid for this match.

Tim O’Brien went down with an ankle injury last week, so now it’s Hawthorn that is short-staffed inside 50 with Jonathon Patton (hamstring) and Luke Breust (jaw) still out.

Having only found the footy nine times last week in his worst performance of the season, Oliver Florent needs to lift here. Luke Parker carried the Sydney midfield against the Suns and needs a partner in crime, which is what Florent should be stepping up to this week. He started the season with 20+ touches in three consecutive games, so there is no doubting his ability to find the footy at this level.

Christian Petracca and Clayton Oliver had a field day in round seven, as Hawthorn’s inside midfielders were down on form and struggled to win the ball. Do not be surprised if you see Chad Wingard roll through the middle more often this weekend, as the Hawks need a lot more of his clean skills outside the stoppages.

It was an excellent return to the forward half last week for Tom McCartin, who kicked two goals and presented well as a taller target. If Sam Reid does return and gets the matchup with James Sicily, the Hawks may struggle to match McCartin in the air. He has a very good conversion rate and should find the middle of the big sticks if he gets a chance early.

Luke Breust is still another week or two away from returning to the Hawthorn forward line, so we will rely on Jack Gunston this week. With 11 goals this season and three against the Dees, the former Crow is a good matchup against the Swans and should cause headaches inside 50. Gunston kicked 7.4 across two games against Sydney last year, so the head-to-head form is decent.

It feels like every week we look at the Hawks and mention how they are neither scoring enough nor defending very well. That has also been the case for the Swans, but this game will be different. John Longmire opened up the field with one-on-one matchups against Gold Coast last week, while Alastair Clarkson will surely want his charges to start taking the game on.

The Swans have confirmed Sam Reid is fit to play and that is enough for us to back them. They would’ve been a much more dangerous side all season if they had a genuine target inside 50 from round one. If Reid is held back another week, however, you might consider the Hawks by a slim margin.