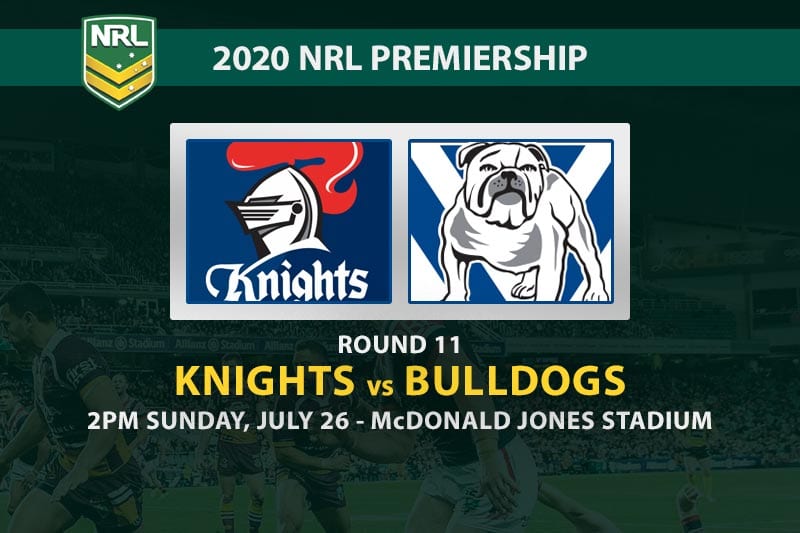 While this contest appears to be a layup for the Newcastle Knights on paper, it may prove to be anything but.

The Canterbury Bulldogs are extremely limited but they play with pride each and every week, while the Knights haven’t strung back-to-back wins together since round two.

After going close to knocking off Parramatta at McDonald Jones Stadium in round nine, Newcastle should be more than good enough to reward their loyal fans with a strong performance and solidify fourth place on the ladder.

Why this game should be approached with caution is the recent history.

Last year the Knights enjoyed a period where they won seven out of eight, lost to the Warriors while missing half their team for State Of Origin, and then completely underestimated the Bulldogs on their home track to kickstart a horror ending to 2019.

Newcastle’s form coming into this game is interesting for a number of reasons. They haven’t won back-to-back games since March, and they almost gave up a 20-0 lead in 15 minutes before somehow holding on against Souths last weekend.

Their best performance comfortably beats the Bulldogs, but how sure can you be they’ll produce that? Play around with the handicap margins, as the 15.5 line feels too big.

In the tryscoring stakes, Kalyn Ponga is paying $12 to bag the opener. Even though he returned to his best last weekend, that quote doesn’t feel like the greatest value.

Kurt Mann at $17 looks like a much better option, as he is enjoying a stellar 2020 and already has five tries in his role as a running five-eighth.

Bradman Best was also at his threatening best against the Bunnies and will no doubt be keen for some early ball to take on Kerrod Holland. He is $6.50 to score two or more tries, and you can bet plenty of punters will be taking those odds.

Best bets for Knights vs Bulldogs