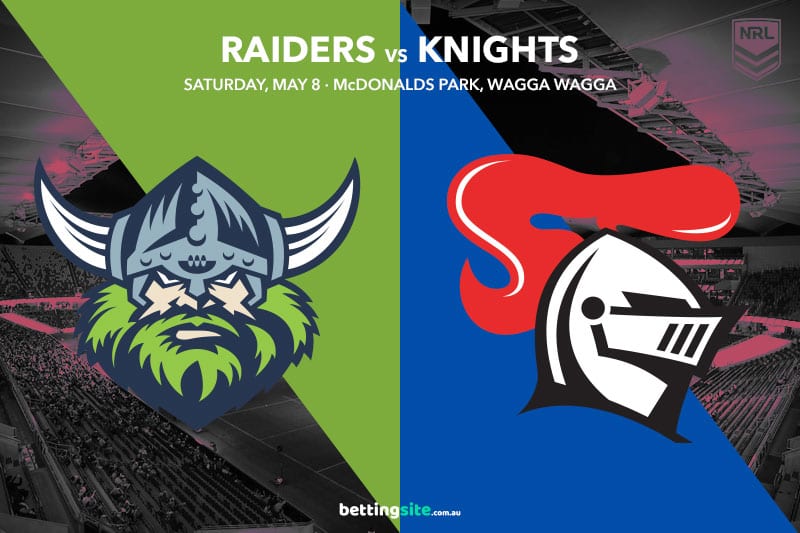 Both the Canberra Raiders and Newcastle Knights have had months they’d rather forget on the field, but their round nine NRL clash at McDonalds Park in Wagga Wagga on Saturday afternoon presents a golden opportunity for both teams to steady the ship. The Raiders competed well for portions of their contest against the Rabbitohs before being blown away in the second half, while the Knights were dreadful in a 38-4 loss at home to the Roosters. Canberra come in as the $1.50 favourites, purely based on this being their home game. Newcastle have lost seven of their last eight games away games, which is arguably the biggest factor in their $2.70 price.

There appears to be a few cats among the pigeons in Canberra with reports of George Williams being homesick, Josh Papalii not mentally at his best, and Joe Tapine’s wife making her husband’s feelings public, but it could be exactly what the doctor ordered for Ricky Stuart. A trip down to Wagga could be the quick fix to get the win, and his side on paper still looks capable of winning this game by 13 or more points at the $2.88 quote with Sportsbet. The over/under total sits at 43.5 points, and it might be the rare day game that falls under.

Newcastle without Mitchell Pearce struggle to score points, and the Raiders will more or less grind their way back into form rather than blow a team off the park. Jordan Rapana lines up on the left edge as the $7.50 favourite to score first, and punters should jump on this one, as the Knights’ right side has had all kinds of issues this season.

Newcastle have scored just 10 points in their last two games, so finding value in the tryscorer stakes isn’t easy. Hymel Hunt comes back on the wing and is $12 with online bookmakers to score the first try of the match, as is Kalyn Ponga. Bradman Best had a tough night against the Roosters, who were all over every set play that was run for him. He is $15 to score first, having saluted as the first and last tryscorer in the corresponding fixture last year. The +5.5 line sounds skinny, but the Raiders have failed to cover the line in each of their last four games, which will give Knights fans some hope.

Canberra’s least spoken about Englishman is Ryan Sutton, but that needs to change. Despite the Raiders’ dismal month of football, he is one guy who has been putting his hand up each week, and when they were winning, he was a big reason why. His ability to offload late and break tackles close to the line make him a key cog in the forward pack. This week he comes up against the smaller Connor Watson, whose move to play in the forwards has proven to be a success despite Newcastle’s overall performance. They may be better off leaning further into his style of play by using short passes at the line and footwork to better isolate defenders. Sutton and Watson couldn’t be further apart in body shape, but both are enormously important for their teams’ chances this week.