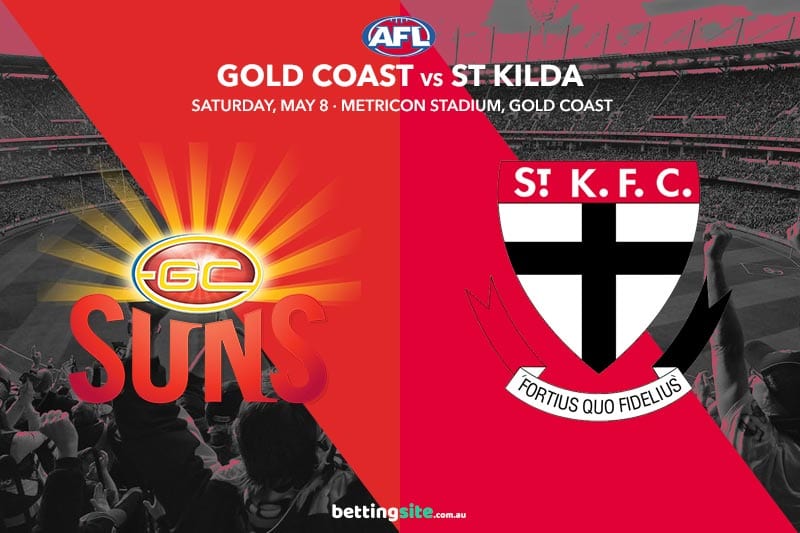 The St Kilda Saints will look for their sixth straight win over the Gold Coast Suns this Saturday afternoon when the two teams do battle at Metricon Stadium in round eight of the 2021 AFL Premiership season.

Stuart Dew has never coached his Suns to a win over the Saints, but they will start as favourites after beating Collingwood on the road last week.

The Saints properly clicked for the first time this season in round seven against the Hawks, playing four quarters of impressive footy on the way to winning by 69 points.

Both sides have won three matches this season and are looking to even their ledgers with a win this week, so this is one contest that could prove important later in the year.

Perfect conditions for footy are predicted on the Gold Coast this Saturday, which will allow both teams to move the ball quickly around the ground. Some 10 of the 14 clashes between the Suns and Saints has gone over this week’s total points line of 160, and that mark looks very achievable once again.

Although the dominance of Brodie Grundy did not cost the Suns last week, the Saints are very good at utilising their ruck duo of Paddy Ryder and Rowan Marshall. Expect more St Kilda midfielders to dominate the stat sheet in this match.

The King twins are two of the most exciting young players in the AFL, and they are now starting to break out and dominate games. Ben King has kicked a goal in every match this season, totalling 20 from his seven game in 2021. Max King has lacked accuracy and consistency in the early round of 2021, managing only 11 goals from his six appearances.

When they played against each other last season, Ben won the duel with three goals to Max’s one. We expect the Gold Coast King will once again win out on the day.

Once the Saints get going, they are a hard team to beat, and we think they will overwhelm the Suns on this occasion. Paddy Ryder and Rowan Marshall do not waste ruck contests, giving the Saints a huge advantage against the ruck-less Suns. Zak Jones and Brad Hill both found form last round and should play a big role again this week.

Jack Sinclair to get 20+ disposals

One of the underrated Saints that quietly accumulates lots of the footy is Jack Sinclair, who is thriving in his new position across half-back. Sinclair loves playing the Suns, averaging more disposals against them than against any other team in the league over his 105-game career. Coming off a 26-disposal effort against the Hawks, we expect Sinclair to dominate against the Suns this Saturday.

Jack Sinclair will star for the Saints as they extend their winning streak against the Suns to six victories. Ben King will be hard to stop for Gold Coast up forward in a match where the total score goes well over the 160.5 line.

Hopefully, St Kilda wins for all those St Kilda fans out there (I’m not one)!
Go, St Kilda!