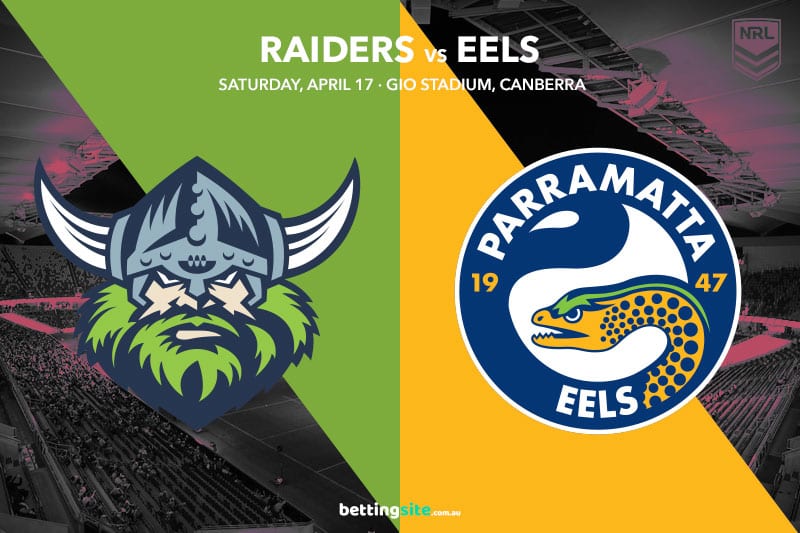 The Parramatta Eels take on the Canberra Raiders this Saturday night at GIO Stadium, where they haven’t won an NRL game for 15 years. The Eels come into the round six clash as the $2.32 outsider following their first loss of the 2021 season, while the Raiders are $1.67 despite their defeat to Penrith last time out. Charnze Nicoll-Klokstad and Ryan James will miss the game for the Raiders, while the Eels will be without star five-eighth Dylan Brown for their biggest test of the season.

The Raiders won 19-0 last time these two clubs played at GIO Stadium, but don’t expect the scoreline to be that one-sided on this occasion. The $2.80 for a Canberra 1-12 win should see a lot of action, and Jack Wighton to back up his first tryscorer effort at $14 is worth investing in. George Williams at $5 to score anytime is another to look at, as well as Jarrod Croker at $3.40. One player who packs a punch is Hudson Young, who is quickly becoming one of the best second-rowers in the competition. At $26 to get the first try, his tenacity and strength close to the line makes him a danger to defend against and one of the best roughies in the field.

The under 37.5 total is one market punters should look towards, as the Parramatta Eels have gone under the points line in their last four night games. Marata Niukore at $4.50 is a good value bet to score a try, as Croker has often struggled to contain big centres. At $14 to score the first try, we think Clint Gutherson backing up on the inside is on the cards too. Blake Ferguson has five tries so far in 2021 and will attract plenty of money coming up against his former club. At $11 to cross first, he is among the among the best options. Maika Sivo also has five tries and didn’t score in round five, so the odds are telling us he is due to cross.

Will Smith is the man to fill the big void that is left by Dylan Brown, but coming up against Jack Wighton is a hard task for the game’s best players, let alone for a backup half. The Raiders have a terrific defensive line, so how does Smith contribute to help the Eels get a rare win in Canberra? His best attribute is his support play, so if he follows Junior Paulo around the field, he will no doubt sniff out an opportunity and play his part.

The Raiders will bounce back and dish out a second straight loss to the Eels in a brutal battle between the two forward packs. A 10-point win to the Green Machine gets their season back on track. The Raiders for the 1-12 win with Jack Wighton, Bailey Simonsson and Marata Niukore to all score a try at anytime gives you a whopping $101 return at Sportsbet.