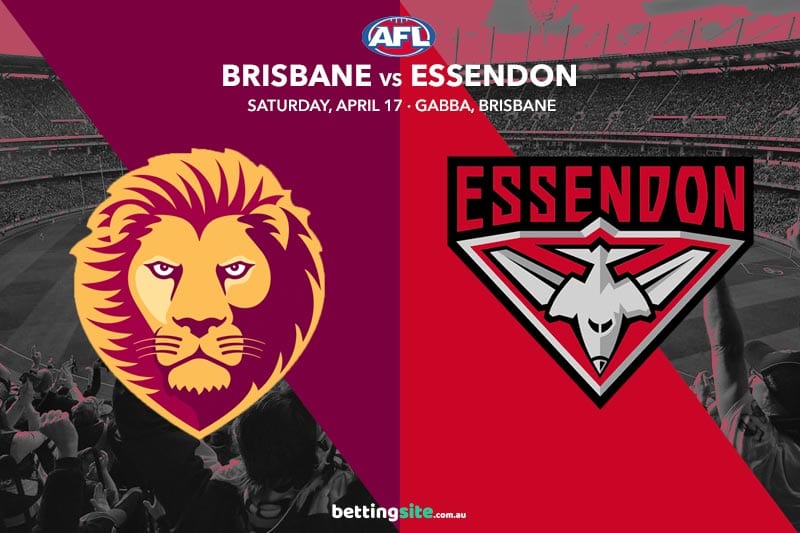 The Brisbane Lions finally get back on their home deck at the Gabba as they host an injury-ravaged Essendon on Saturday night in round five of the 2021 AFL season.

The Lions will be glad to be back in Brisbane for the first time since Round 1, having been stuck in Victoria due to the snap lockdown in Queensland. Sitting in a precarious position at 1-3, this suddenly becomes a must-win match for last year’s preliminary finalists. They are close to full strength for the clash against Essendon, albeit without Cameron Rayner (knee) due to a season-ending injury.

The Bombers, on the other hand, have adopted the mantra of playing the kids as they deal with one of the longest injury lists in the competition. Mason Redman and Dylan Clarke are both slight chances to come back into the lineup this week, while Patrick Ambrose is also pushing his case. The Dons were so close to bringing Sydney undone last week and could cause a few problems for one of the premiership fancies this season.

How will Lions vs Bombers play out?

The Lions need to win games like this if they wish to play finals footy this year, and they will want much more output from star players such as Charlie Cameron. The livewire forward has been unusually quiet to begin the season, with just four goals to his name from four games. Like the rest of his teammates, Cameron will appreciate getting back to the Gabba, and we think he can double his season tally in one night. The $5.50 available at AFL bookmakers for Cameron to kick four or more goals looks like a good play given he is up against an inexperienced backline.

Essendon fans should be buoyed by the effort the ‘new baby Bombers’ put up against the Swans last weekend. The standout was young Nik Cox, who picked up 18 touches and kicked a goal in the best game of his nascent career to date. With $2 on offer for the no.8 draft pick to kick a goal at any time this week, we expect Cox to continue his good form and hit the scoreboard again.

Eric Hipwood and Joe Daniher might be the most fearsome forward duo in the competition in years to come, but the two are yet to fire on the same occasion in their first month of footy together. They come up against an Essendon backline that will be relying on two youngsters to curtail the influence of their former teammate and his new partner-in-crime.

Jordan Ridley is one of those new-age defenders who love to float in from the side of the pack and kill the contest, rather than match up one-on-one with a key forward. Brandon Zerk-Thatcher is more of a traditional stopper, but he has only a handful of senior games next to his name and will need to back up after getting the Buddy Franklin treatment last weekend. Whichever way you look at it, this is a big ask for the Essendon duo.

Brisbane Lions to win by 25+ points

The only win Brisbane have against their name for the season came when Zac Bailey kicked truly after the final siren to down Collingwood. The Lions were one of the premiership fancies at the start of the year, but they are yet to put together a strong four-quarter performance. The Bombers will put up a fight on Saturday night, but the Lions will flex their muscles as they get to a more respectable 2-3 record.

Jarryd Lyons to get 30+ disposals

It is amazing that Jarryd Lyons was delisted by Adelaide and then again by the Gold Coast Suns. He is now one of the most consistent midfielders in the competition and has started the year in fine form. He averages 25 touches per game from the first month of footy, and despite not clearing 30 disposals yet this year, we are backing him to do so against a second-string Essendon midfield.

Back on home soil, the Lions should put on a show for their faithful against this inexperienced Essendon lineup. We expect Charlie Cameron and Jarryd Lyons to lead the charge for Brisbane, while Nik Cox will put his hand up again for a Rising Star nomination.