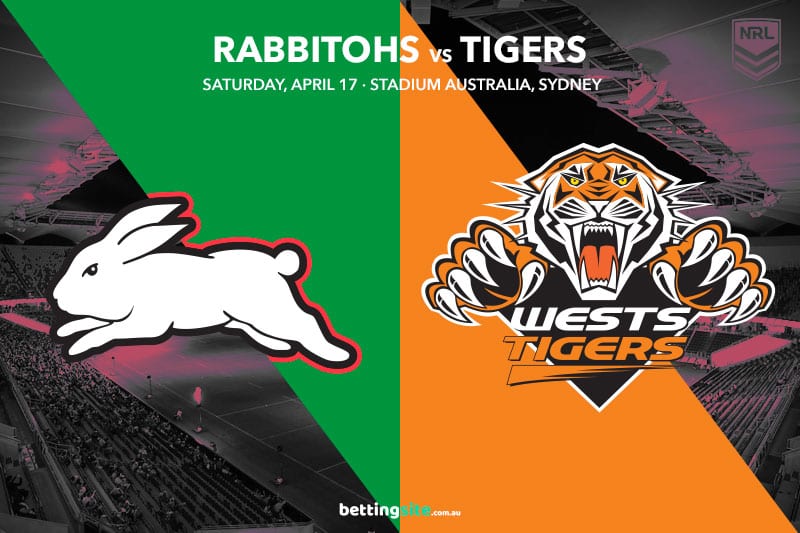 Stadium Australia will host what has quickly become a must-win game for the Wests Tigers against the South Sydney Rabbitohs on Saturday night.

After their disastrous performance at Leichhardt Oval against the Cowboys, but the Tigers are almost guaranteed to start the year 1-5 and virtually rule themselves out of the running for their first NRL Finals berth in a decade. Normally games in round six hold no bearing on teams chances at playing finals, but their season is falling out of their grasp. At the long price of $9, not even their most loyal fans can talk themselves into a win.

The Rabbitohs are on a four-game winning streak and are being given a -19.5 line by the online bookmakers, and it’s hard to see a scenario in which they are pushed hard for the two points. Cody Walker returns from suspension as the Bunnies go for their 10th regular-season win at Stadium Australia in their last 11 starts there.

The right edge of the Tigers was all over the place against the Cowboys, and it means good things for Bunnies’ fans. Latrell Mitchell is every chance of scoring a double, so take the $5 on offer at Sportsbet. Also include Alex Johnston in any bets as either the first or anytime tryscorer; he holds the record for most tries at the venue. The -19.5 line should also go on all NRL betting slips this week, as Souths will cover it comfortably.

Once the Tigers got rolling against the Cowboys, it was out wide where the found joy. If it wasn’t the likes of Luke Garner or Luciano Leilua in the back row, it was David Nofoaluma crossing next to the corner post. Leilua has set up two tries in consecutive games for Daine Laurie by tapping chip kicks back for him, and that looks to be the best chance they have to jag a try at $3.75 in the anytime market. They have caused upsets in the past against the Rabbitohs, but it just feels like Saturday won’t be one of those days.

Jake Simpkins will make his debut at dummy half for the Tigers and has the tough ask of coming up against the incumbent New South Wales hooker, Damien Cook. Simpkins is the leading tackle maker in reserve grade this season as well as being a great running threat, but can he stiffen up the defence around the ruck to help make life easier on the edges?

Take Souths at the line and watch the cash roll in. They’re far superior to the Tigers, and Latrell Mitchell will have a field day on the back of some dominant forward play. Rabbitohs -19.5 with Alex Johnston to score the first try gets you $10 at Sportsbet.