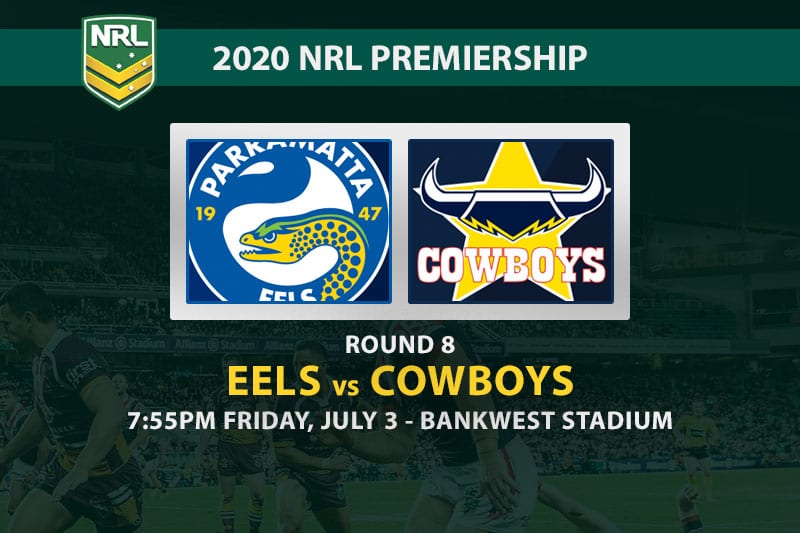 Just a fortnight ago, the North Queensland Cowboys travelled to Sydney and trailed 34-0 at half-time to the Tigers. A week before that, they lost on the Central Coast against the Warriors.

They are paying $3.30 for a reason, but Paul Green’s men did bolt back into some hot form at home last start against Newcastle to lead 26-0.

Just who the real Cowboys are is anyone’s guess, but you would have to expect them to struggle on the road again this week – especially in the COVID world of same-day travel from Townsville.

If they can get more of the same production from Jordan McLean and Josh McGuire to help Jason Taumalolo, they may be able to make a contest of this.

However, the Parramatta Eels‘ record at Bankwest Stadium and the form of Reagan Campbell-Gillard and Junior Paulo up front suggest it may too big a mountain for North Queensland to climb.

Parra will be missing their key playmaker in Mitchell Moses, but fans will get their first look at Jai Field, who came across from the Dragons for the equivalent of a pie and a can of Coke.

His blistering pace will be a weapon, especially with how much second-phase play Parramatta create. Field is $26 at BetOnline in the first tryscorer market and looks well worth a shout.

The Cowboys have the competition’s leading tryscorer in Kyle Feldt with nine so far this season. He is paying $2.20 at Bet365 to score at any time and $8 to bag a double.

There is a danger for Parramatta to slip up after tough games against the Raiders and Roosters in their last two starts, but they should still have enough in the tank to take care of this mob.

Ladbrokes has the over/under total set at just 38.5, which is three points lower than what most online bookmakers are running, so the overs looks a monty given North Queensland’s horrid form on the road.

Best bets for Eels vs Cowboys