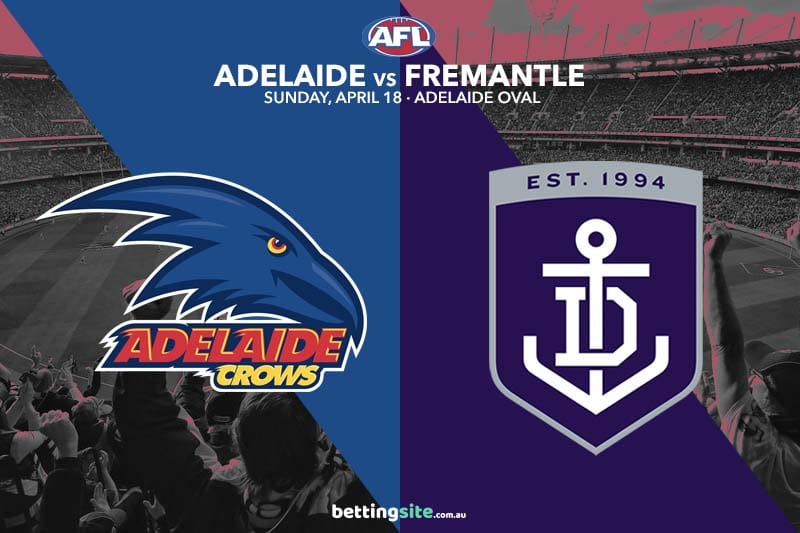 Adelaide Crows will be pushing for a top four spot against Fremantle at the Adelaide Oval in Sunday AFL action.

Matthew Nicks’ Crows have been the biggest surprise package of 2021, playing a strong brand of football on their way to winning three of their first four matches.

The Dockers sit just outside the top eight with two wins and two losses, but coach Justin Longmuir would be pleased to see their improvement in the forward half.

Both the Crows and Dockers are functioning better up forward, as the Crows have eclipsed the 100-mark twice already this season, while the Dockers are coming off a 96-point performance.

Neither club will be forced to make a selection change this week after getting through round four unscathed, but the Dockers may consider bringing in talented defender Griffin Logue.

The biggest factor heading into this match will be the location, as the home field advantage will give the Crows a huge boost against Fremantle.
The Dockers have not won a match outside of Perth this season, while the Crows remain undefeated in front of their fans at the Adelaide Oval.

Until Taylor Walker plays an off game, he will be the most important player each week for the Crows. No defender has effectively quelled the former Adelaide skipper, who is averaging five goals per game this season. Luke Ryan may not be the direct match-up with the big bodied forward, but his leadership and aerial presence will come into play. Fremantle’s back six needs to work in tangent to give Walker a minimal number of opportunities, but the key forward is on a tear and should still find a way to have an impact.

Paul Seedsman to get 25+ disposals

Since moving across from the Collingwood Magpies, Paul Seedsman has been a revelation for the Crows. Seedsman has collected over 20 disposals in every game this season, and surpassed the 25 mark in his last two contests. The wide Adelaide Oval ground provides plenty of room for the elite runner to get on the outside and collect easy disposals.

Even without Rory Sloane leading the way in the midfield, the Crows look settled in the guts and should have give than enough opportunities for their forwards. We cannot trust the Fremantle Dockers away from home this season, as their intensity is not up to scratch the second they leave WA.