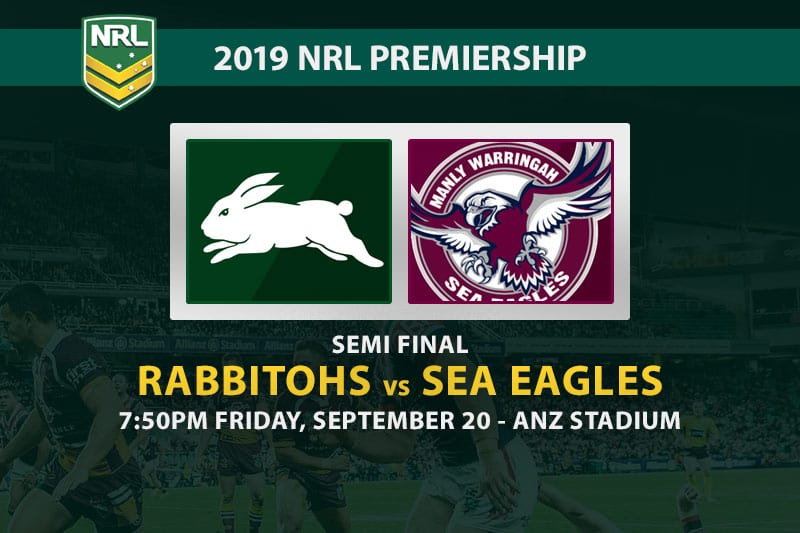 If recent form is any indicator, Friday’s NRL semi-final at ANZ Stadium should be a belter.

The South Sydney Rabbitohs and the Manly Sea Eagles have met twice this season, with each claiming a one-point win on their home deck.

That gives the Bunnies the slightest of head-to-head advantages as the hosts, but their chances will improve further with some big names returning.

Every week is a bonus now for the Sea Eagles, who suffered some critical outs in the last few rounds before the finals.

They were good enough to beat the Cronulla Sharks, however, and will hope to spring another upset at Homebush.

Souths have two huge additions to the side that lost to the Sydney Roosters, with Sam Burgess back from a ban and Dane Gagai recovering from a hamstring injury. They slot straight into the starting 13, which sees Corey Allan and Jaydn Su’A drop to the reserves. Tom Burgess joins the pack after starting on the bench last week, with George Burgess moving to the interchange.

Marty Taupau is back from suspension and reclaims his place in the front row, which sees Sean Keppie revert to the bench and Toafofoa Sipley drop to the reserves. Also on the cover list is Tony ‘T-Rex’ Williams, who was an emergency call-up last week but did not make the final 17.

Brad Parker – The bookies are heavily favouring Manly’s wingers even though neither found the line last week. Parker did score a try, however, is paying overs to do it again at $4.33 with Sportsbet.

This should be a good, hard contest from the first whistle to the last. The Souths defence looks much stronger with the Burgess boys back, while Gagai is a big inclusion in the back half. Manly looked tighter last week after some sloppy displays late in the home-and-away season, but can their backs fire again without Tom Trbojevic? The Bunnies have more class on the park and should get over the line.