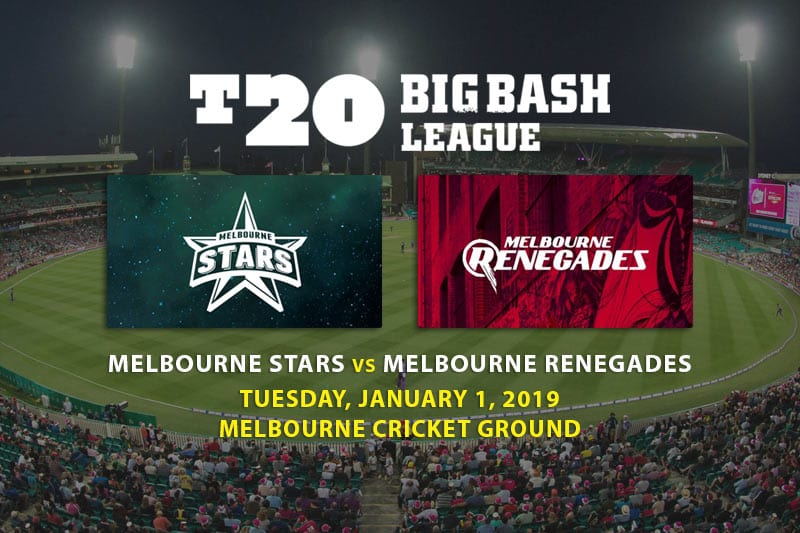 VICTORIAN cricket fans need a New Year’s pick-me-up after the disappointment of the Boxing Day Test.

Lucky for them, a monster Big Bash League clash is right around the corner.

Melbourne Stars are a sky high after conquering the Sydney Cricket Ground to claim their first win of the season.

It was all about Peter Handscomb from there as the dumped Test batsman stroked an effortless 70 from 35 balls to steer the Stars to victory.

Melbourne Renegades had no such joy when they hosted the Sixers on Saturday night.

Andrew McDonald’s charges came into that clash with a perfect record after resounding wins over Perth Scorchers and Adelaide Strikers.

Things looked promising when the ‘Gades held their opponents to 7/132, but that proved more than enough on a two-paced Marvel Stadium wicket.

Nevertheless, there were plenty of positives to take out of that result.

Young gun Mackenzie Harvey did his job with a well-made 30 at the top of the order, while the seam trio of Kane Richardson (3/22), Jack Wildermuth (2/22) and Usman Shinwari (1/17) delivered once again.

The Renegades will receive a huge boost if Aaron Finch is cleared to play after missing the early rounds of the Big Bash season due to international commitments.

While his mates in the Australian team were throwing their wickets away in the Boxing Day Test, Handscomb was up in Sydney making a strong case for a recall.

Quick runs are par for the course in T20 cricket, but there was a sense of purpose and a touch of class about the way the Victorian went about his business at the SCG.

He timed the ball beautifully and, in stark contrast to his play in the Test arena this summer, made a point of getting forward to the quicker bowlers at every opportunity.

It might be too soon to start calling for Handscomb to reclaim his spot in the national team, but the Stars can benefit enormously from his desire to hold the selectors’ attention.

He was the obvious MOTM against the Sixers, so that market is well worth a look.

There is some decent money about for Handscomb to notch another 50, but top Stars runscorer looks the best of the bets.

There is no doubt the Renegades have made a better start to the season than the Stars.

There is also no question the red half of Melbourne will be far, far more dangerous if Finch returns at the top of the order.

However, there are some rumblings about whether their bowling attack can get the job done away from Marvel.

The sticky wicket there suits their talented seamers, but they were exposed somewhat when the Strikers took them for 174 at Adelaide Oval.

On the vast expanses of the MCG, the Stars and their in-form spinners – along with former Renegades hero DJ Bravo – might have the advantage.