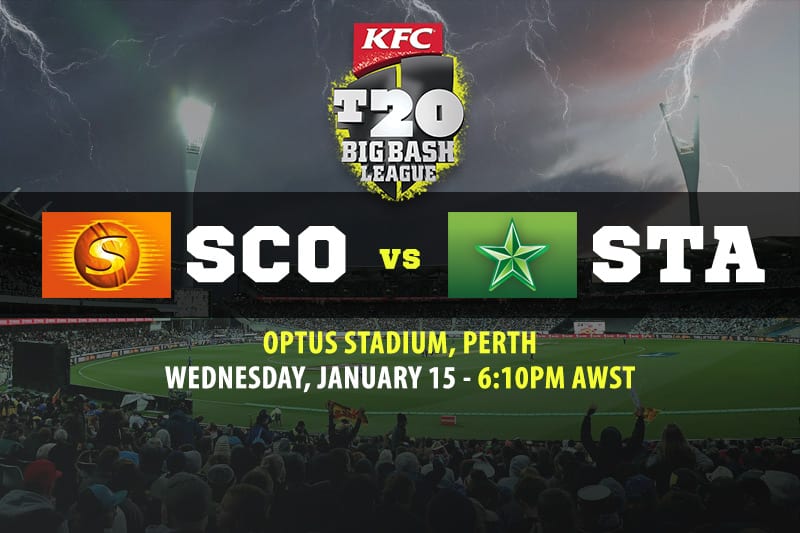 The Melbourne Stars have been beating teams with ease, but will they survive the trip to Optus Stadium when they take on the Perth Scorchers this Wednesday?

If you like to see cricketers hitting big sixes and making large scores, this is the match for you as Mitchell Marsh and Marcus Stoinis are experts with the bat.

The Perth Scorchers have not had their best season in BBL09, winning only four of their eight matches to sit sixth in the Big Bash League standings with a negative run rate.

Winning has become second-nature for the Stars, who have not lost in the new decade and sit top of the table after six straight wins.

The Scorchers won last time these teams met, but past form means little given the squads have changed considerably since then.

What matters the most is how well each team is currently playing, and it won’t get much better for a Stars side that posted 219 against the Sydney Sixers with Stoinis smashing 147no.

Bowling will be the most important aspect of this game, as both teams have enough batting firepower to take full advantage of anything loose.

Mitchell Marsh Scorchers most runs
With the fifth-most runs in the competition, Mitchell Marsh is thriving as the lose superstar in this new-look Perth Scorchers side. Averaging over 50 runs per innings, the West Australian will need to be red-hot when facing the Stars, as he may be the only hope for the Scorchers to make a large total.

Marcus Stoinis Stars most runs
If you are backing any player other than Marcus Stoinis or Glenn Maxwell, you are probably making a big mistake. Stoinis put on a show against the Sixers on Sunday as he set a new record score for a batsman in the BBL. Maybe it has been his exclusion from the ODI squad, or maybe he is just seeing beach balls out there, but Stoinis is nearly unstoppable. There wasn’t a single moment before making his 100 where he looked nervous or streaky.

Jhye Richardson Scorchers most wickets
Although Jhye Richardson started off his campaign very slowly and looked a bit like a fish out of water, the last few matches have been promising from the young fast bowler. The WA quick has a very tight action that puts emphasis in his straight line, but his variety in length and pace is his big weapon. If the Scorchers want to beat the Stars’ opening three batsmen, Richardson is their best bet.

Haris Rauf Stars most wickets
Bowling fast and taking wickets is what Haris Rauf does best, which is why he averages the most wickets per match in the BBL this season. He may find wickets a little harder to come by now that he has become the main point of emphasis for opposition batsmen, but Rauf will be there or there abouts no matter the situation.

Melbourne Stars to win @ $1.60 with PlayUp
We love watching the Melbourne Stars put on a show each time they enter the field, and we also like to back them with confidence. We don’t see them losing against the Scorchers, who are still finding their way this season.