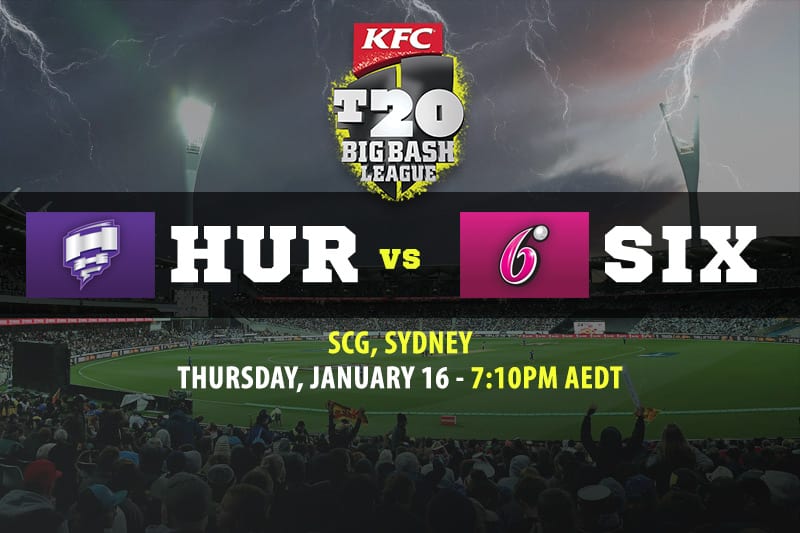 The Hobart Hurricanes will look to make up ground on the rest of the Big Bash League when they on the Sydney Sixers at the SCG on Thursday night.

While both teams are stacked with strong players, they find themselves at opposite ends of the table with a little over two weeks remaining in the 2019-20 BBL schedule.

The Sydney Sixers have won six out of nine matches, placing them in a perfect position to make the BBL finals with Steve Smith returning to the squad.

It has been a poor season for the Hurricanes, who sit second last with only three wins and a lower net run rate than the winless Melbourne Renegades.

The Canes would be hard to beat if they played to their potential, but more often than not they are falling short in key areas.

Now that D’Arcy Short is away on international duty, a few players need to step up for Hobart to have any chance of reaching the Big Bash finals.

Daniel Hughes 30+ runs
For so long one of the most reliable batsmen in the Sydney Sixers’ camp, Daniel Hughes needs to step up and be the anchor of the innings. Too many times has the experienced lefty come in and gone out within minutes, leaving his teammates to pick up the scraps. When Hughes establishes his innings, it normally means he exceeds the 30-run mark.

Ben McDermott 30+ runs
It has not been the best season for Ben McDermott, who has fallen well short of the high mark he has set over the past few years. McDermott is batting in the middle-order and still averaging over 23 runs per match, but he has passed 30 only twice in his nine innings this summer. We expect the Hurricanes’ top batsmen to struggle on this pitch and for McDermott to come in and play well.

Lloyd Pope 2+ wickets
If the SCG pitch plays in its usual way, the spinners are going to enjoy this match. With 10 wickets in his eight BBL09 games, Lloyd Pope is one of the best spinners in the league, with only three other spin bowlers above him for wickets taken. Although he did not claim any scalps against the Melbourne Stars, he was very economical and looked dangerous throughout.

Qais Ahmed 2+ wickets
With the same mindset of attacking with spin, Qais Ahmed is the best choice for the Hurricanes. Having taken one more wicket than Lloyd Pope this season, Ahmed is a hazardous bowler who offers plenty of variability. If the Hurricanes bowl first, he may find it hard to use the pitch early on, but Qais is talented enough to make an impact regardless of the conditions.

Sydney Sixers to win @ $1.62 with Sportsbet
The Sydney Sixers are possibly the second-best team in the competition behind the Melbourne Stars, and a win in this match would be a promising start to their run towards the finals. There are only five more Sixers matches this season, and they get back Steve Smith for the final two, so they will want to win as many games as possible before he returns.