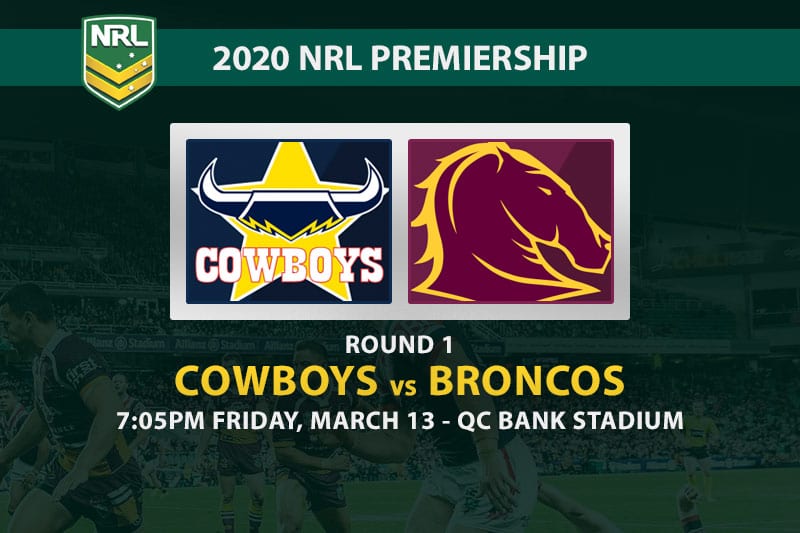 The North Queensland Cowboys will christen their new home ground with a NRL Round 1 blockbuster against their intrastate arch-rivals, the Brisbane Broncos.

The unveiling of the Queensland Country Bank Stadium will also mark the Cowboys debut of Valentine Holmes, who returns to the NRL after an unhappy stint in the United States. Esan Marsters will also make his bow for North Queensland in a new-look back half.

The Brisbane Broncos have a few new faces as well. Brodie Croft takes over at halfback after his switch from the Melbourne Storm, Jesse Arthars will start on the wing and Jamil Hopoate is set for a long-awaited NRL debut.

Both these teams are looking to improve on disappointing 2019 campaigns, so we can expect plenty of intensity from the first whistle.

The new inclusions mean Scott Drinkwater lines up at five-eighth alongside Michael Morgan, while Jake Clifford is listed among the reserves. Queensland prop Josh McGuire is unavailable due to suspension.

Jack Bird was named to start at fullback, but a midweek training injury means Jamayne Isaako will take the no.1 jersey instead. Corey Oates has recovered from an infection to take his spot on the wing, but Alex Glenn is out with a hamstring injury.

Another offseason recruit has grabbed the limelight, but Marsters could prove just as valuable to a Cowboys side that lacked strike threats last season. Those odds are very tempting for a player who scored nine tries last season.

Despite Brisbane’s issues on both sides of the ball last year, Oates finished with 13 tries from his 22 appearances. The Queensland winger is a reliable scorer who should benefit from the recent rejigging of the halves.

Cowboys vs Broncos NRL Round 1 predictions

Bird’s injury is a big blow for the Broncos. The betting was tight before that news broke, but now the Cowboys have the upper hand. Back the hosts to get up in a close one.