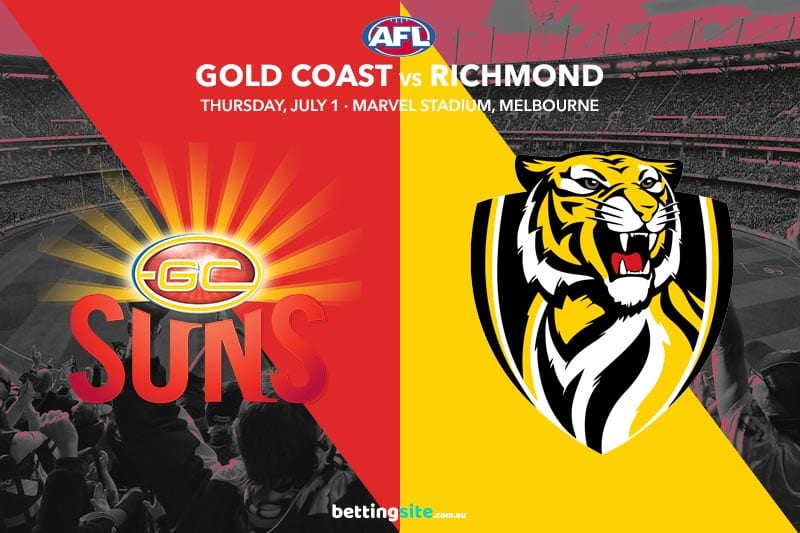 The AFL has worked overtime this week to ensure round 16’s Thursday night clash between the Gold Coast Suns and Richmond Tigers goes ahead, moving the game from Metricon Stadium to Marvel Stadium to avoid COVID restrictions in Queensland.

Damian Hardwick’s Tigers were abysmal last week against St Kilda, kicking just two goals in the 40-point loss. To add injury to insult, Noah Balta and Nathan Broad both suffered syndesmosis injuries during the round 15 spanking.

The Suns gave North Melbourne a red-hot crack in the first half of their match last week, but they could not keep up for the entire contest and suffered another disappointing loss.

This week’s team selection is going to be very important for both sides; the Suns will look to bring back David Swallow and Sam Collins, while the Tigers will hope any of Tom Lynch, David Astbury, Mabior Chol and Nick Vlastuin pass their fitness tests during the week.

Will the Tigers make the most of the fortunate venue change, or will the Suns pounce on this opportunity to beat the out-of-form reigning premiers?

The Tigers have enjoyed playing against the Suns in recent years, winning the last six clashes by an average margin of 53 points. The Suns have lost six of their last seven games this season, but the return of Sam Collins will make a huge difference to their young defence.

A number of Gold Coast forwards have fought hard this season, namely the 2018 draft duo of Ben King and Izak Rankine. King has been a consistent contributor all year, while Rankine is very hard to stop when he is on song. Online bookmakers are offering $3.25 for Rankine to kick two or more goals this Thursday night, and the talented forward could easily achieve that.

One of the most underrated footballers in the country is Touk Miller, who will be given the job of stopping Dustin Martin this weekend. Martin has been outstanding against the Suns throughout his career, averaging 28 disposals from his last five matches against them. Miller has effectively shut down Dusty in their last two clashes, but the 2017 Brownlow Medal winner should step up in the midfield since Dion Prestia is sidelined with another hamstring injury.

Although the odds are heavily against them, we think the Suns will put up a strong fight against Richmond this week. Two of Stuart Dew’s most important players should return in Sam Collins and David Swallow, whose experience and talent will instantly impact the young group. The Tigers only beat the Suns by 21 points last season.

Dustin Martin to get 25+ disposals

No Richmond player registered 25 or more disposals in last week’s loss to the Saints, but we believe Dustin Martin will stand out here. The champion midfielder has effortlessly moved around the ground in 2021, as Damian Hardwick can swing him forward at any moment. Martin should start and finish this contest in the midfield and collect plenty of disposals.

Despite a fixture reshuffle forcing the Suns to fly out of their home state, we think they will make the Tigers sweat out this contest. Izak Rankine should star up forward against the offensive-minded Jayden Short and Liam Baker, while Dusty will be at his best in the middle. You can combine these three legs at Sportsbet for a $12.75 return.