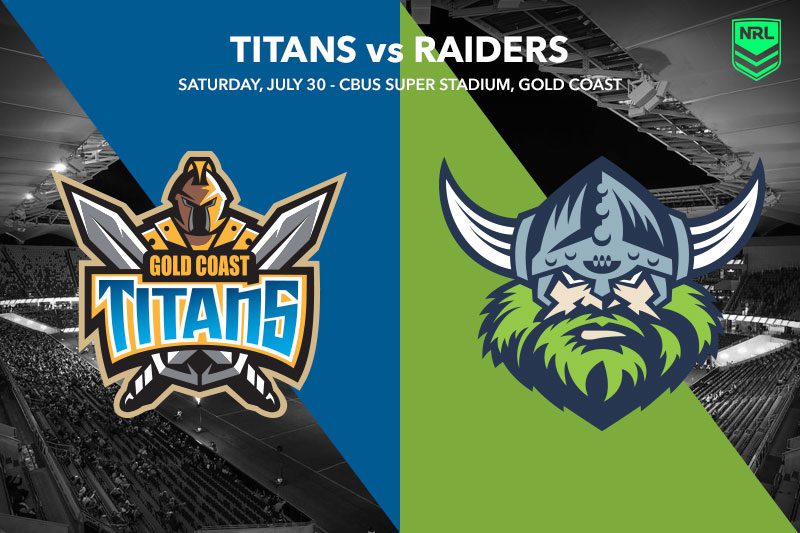 The Canberra Raiders will look to continue their unlikely charge to the NRL finals when they head to Robina to take on the Gold Coast Titans on Saturday afternoon. The Titans are out of top-eight contention and locked in a race for the wooden spoon, so the ramifications of a loss for them could be severe.

Three months ago, the Raiders looked no chance to be in this position. They started the season with a 2-6 record, and one of those victories came against the Titans where they had to come from 22 points down to win at home.

Since they lost to the Warriors in Round 8, the Raiders have quietly gone 7-3 to pull themselves into finals contention with just six games remaining.

Canberra had a frustrating first half against the Warriors last week before they showed some maturity in the second half to pull out a good win, so will they be better prepared for a similar opponent having just come off a game like that?

The Raiders come in as the $1.39 favourites with BetOnline, and that is a cautious price due to their 3-6 record away from home. Do the punters back them to repeat efforts like they produced down in Melbourne?

The good news for Canberra is their fantastic record at CBUS Super Stadium, where they have a 5-2 record under coach Ricky Stuart. The Raiders have a good supporter base in the South East Queensland region and you can guarantee they’ll be out in force.

The other factor is Manly missing seven players for their upcoming clash with the Roosters. The two points could see Canberra move past the Sea Eagles and throw yet another spanner in the works of an exciting finals race.

Sebastian Kris should be put in a same-game multi to score at any time at the $2.35 price. The Titans’ right edge has all kinds of defensive issues and Kris is never far away from the try line.

The less said about the Titans’ season, the better. A lot of the hope their fans had for season 2022 was fools’ gold, given in 2021 they made the finals with a 10-14 record and barely left the state of Queensland. Why they thought this roster was that good is anyone’s guess, but that is a discussion for another day.

Gold Coast have lost 13 of their last 14 games and they look Buckley’s chance to win this one at home. They did have an improved showing against the Broncos in their last home game, but they have conceded 30 or more points in five of their last seven outings. The Broncos game looks like the exception rather than the rule at this point.

The online bookies are giving the Titans a +7.5 handicap, but it doesn’t look like it’s going to be enough. Jojo Fifita might be a good player to get into a multi to score, as he has shown plenty of pace in his limited showings in the top grade.

Jamal Fogarty is largely pointed to as the reason the Titans are having a bad year. Many say they are missing his leadership on the field and strong kicking at halfback, but until last start for Canberra he had been a long way from his best since returning from a knee injury. He will be keen to have a good game against his former apprentice Toby Sexton.

Canberra should win at the 13+ margin. Games between these clubs have typically been high-scoring and Canberra have shown more defensive resolve than the Titans in 2022. It will prove to be enough to get a 14-point win.