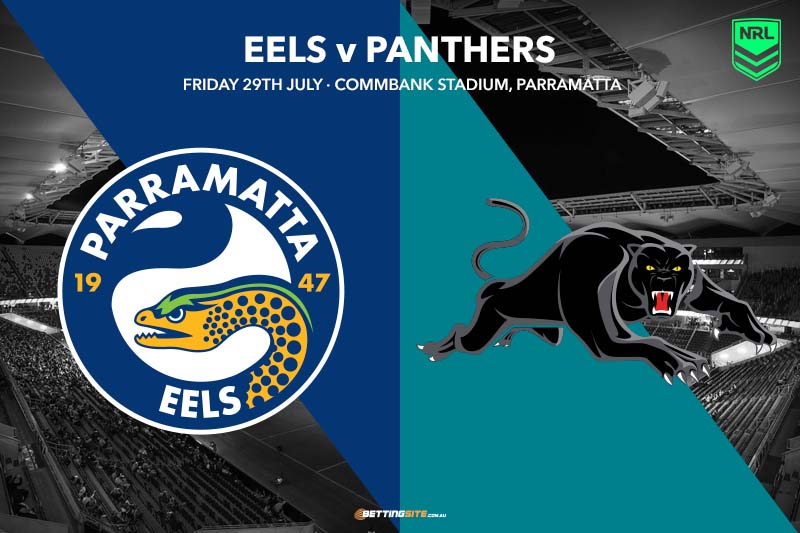 Friday Night Football will wrap up in Parramatta when the Eels host the competition leaders the Penrith Panthers. This battle of the west will be bigger than usual, as not only are the Eels fighting for a spot in the top four, but the Panthers will not have forgotten their last encounter. That encounter took place in Penrith and the Eels broke one of the largest win streaks in NRL history, as the Panthers had not been beaten at home for over 20 matches. The Eels are the only side to have beaten both the Panthers and Storm this season, will they be able to do it again on Friday?

The Penrith Panthers have some issues with injuries as Mitch Kenny and Jarome Luai both have knee issues, while Stephen Crichton is out with concussion following heavy head-to-head contact with Dale Finucane against the Sharks. The Eels are at full strength heading into this clash but have dropped Jake Arthur to the reserves and replaced him with former Panther Bryce Cartwright.

The Panthers are slightly ahead of the Parramatta Eels in their history of encounters, having won 24 of 46 matches. While they did lose in round nine narrowly earlier this year, the Panthers were victorious in the finals last season in a narrow win over the Eels in Mackay. Should this contest be a defensive slog, the Panthers have more runs on the board in that department.

Interestingly, with three players ruled out of the Panthers starting seventeen, there have been no major shifts for the Eels in betting markets. This would be largely due to their inconsistency throughout the entire 2022 season. As talented a side they have, they’re no certainty to beat a slightly under strength Panthers side. The Panthers have won 52% of their games at CommBank Stadium and are expected to do so again. However, with Crichton and Luai missing, the better value is in backing the Panthers to win by 1-12 points paying $2.80 with Palmerbet.

With Luai missing from the starting line-up, one can assume the attack for the Panthers will be more dominant on their right-hand side of the field than their left. With Crichton missing on that right-hand side, Robert Jennings is more likely to become a decoy for the Panthers. This will make Brian To’o the number one target for Nathan Cleary in attack, and To’o should cross the white stripe at any time paying $1.96.

Cleary will be charged entirely with leading this Panthers attack, and with eyes on him to see where he distributes the ball on Friday, his own running and attacking ability may be forgotten. Cleary will almost certainly have his eye on any gaps that open for himself, and should he be given the opportunity, will be a great value bet as an any time try scorer paying $3.75 with the top Australian bookmakers.

Paulo and Fisher-Harris are two of the biggest alphas in the NRL, but there will only be space for one at CommBank on Friday Night. Their sheer strength and aggression in their ball carrying will be at the fore front, and when they clash, heard in living rooms across the country. One skill Fisher Harris lacks that Paulo doesn’t is in passing. Paulo can make a strong carry as easy as he can play the ball late at the line to create time and space for those around him. Will Fisher-Harris be able to make up for a lack of ball playing ability with his aggression and work ethic?