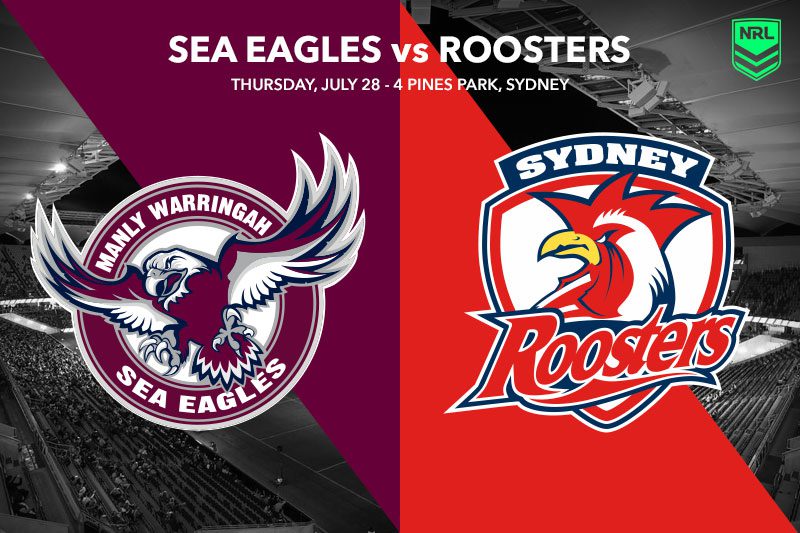 Thursday Night Football travels to Brookvale, where the Sea Eagles will host the Sydney Roosters at 4 Pines Park to kick off round 19 of the 2022 NRL season. The Sea Eagles have been dealt a massive blow in the lead up to this season-defining clash, with multiple players choosing not to play due to issues with the jersey being worn by the home side. The Roosters have been flying high in recent weeks and will be looking to continue their dominance.

The Sea Eagles have won on 20 of the 37 clashes between the two clubs, with the last one going the way of the Roosters by a large margin. Changes are rife in a Sea Eagles side that features four players outside of the top 30 in the club, including two players making their first-grade debut and another in James Segeyaro making his club debut. For the Roosters, Joseph Manu returns in the centres and Lindsay Collins starts in the front row following his concussion in game three of the State of Origin series.

This match shaped to be one of the best of the weekend, with both sides pushing to cement their spots in the top eight for the finals. Sadly, with the changes to the Manly side, it now looks to be one-way traffic for the Roosters. With such little value about the favourites in the main markets, it might be worth looking to the alternative lines and margins on offer at BetOnline.

Tries in this match are expected to come think and fast for the Roosters given Manly’s depleted side. James Tedesco is one man to keep an eye on given his incredible running game and support play. Manu is the other who has been given licence to roam, despite coming back from a light calf injury. Both Tedesco and Manu are a great chance of scoring two or more tries, paying $4.50 and $6 respectively.

Regardless of which Roosters do the damage on Thursday, any points scored by the Sea Eagles will be a bonus. Should they find some points as well, this match looks certain to exceed the 45.5 match total.

The contest between these two halfbacks will be interesting in the difference of assignments both players have. Daly Cherry-Evans is captaining a side and orchestrating an attack that is without seven of its best players. He will have to metaphorically scale Everest if he is to direct this team around 4 Pines Park and lead them to a win. On the other hand, Sam Walker is tasked with leading an attack that gets one of the best players in the NRL back in Manu. Can Cherry-Evans lift to lead his side to victory on Thursday?