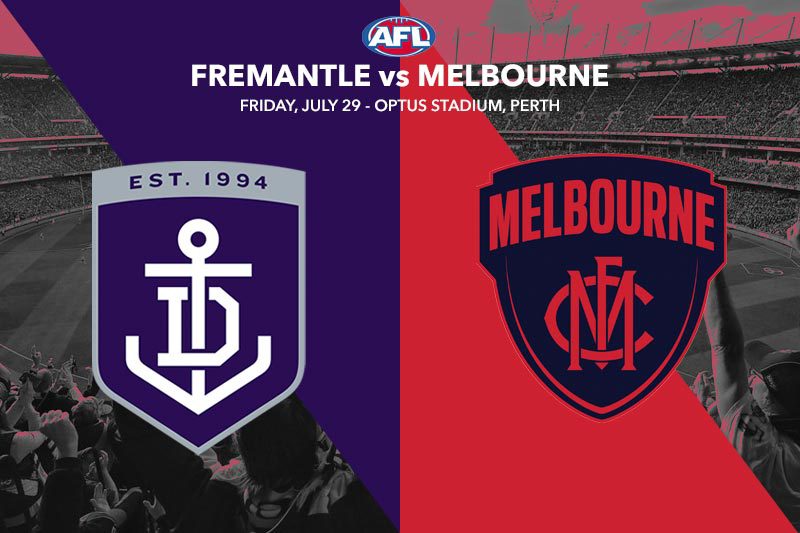 After disappointing recent results, the round 20 clash between Fremantle and Melbourne at Optus Stadium this Friday night will show us who is genuine top-four material.

Fremantle players found themselves in an unlikely position when the siren sounded on their round 19 fixture. They had dodged some late bullets to extract a miraculous draw from their match against Richmond, but nobody was sure if this was cause for celebration, or heartbreak.

The Dockers have been sliding in recent weeks and have now surrendered their top-four position. They need to regain some winning form without delay. Finals are just around the corner and knocking over the reigning premiers would be a good way to show the comp they are genuine contenders.

The Demons are also on the dreaded slide. After playing some scintillating football they were edged by the Dogs in a round 19 thriller. The loss sees Melbourne join a logjam of teams on 52 premiership points, and they also face the prospect of dropping out of the top four if results conspire against them.

We have pondered whether the Demons have another gear that can be activated when they really need it, but they conceded five goals to the Dogs in the last quarter while kicking one of their own. That would have been time to hit the top-gear button, but it wasn’t there to push.

Fremantle ruck Sean Darcy is having a stellar year. The 24-year-old is averaging 14.2 disposals, 31.6 hitouts, 10.6 hitouts to advantage, and 4.6 clearances per game. While not the most agile ruckman in the league, Darcy does his job for the side by delivering first ball-use to the likes of Andrew Brayshaw and Will Brodie. Those are two of the season’s standout midfielders, and they could not operate without a quality ruckman working for them in the middle.

Melbourne’s Max Gawn is the measuring stick for all modern rucks with his unmatched versatility across the field. It’s enlightening to compare his numbers to Darcy’s; Gawn is averaging 19.2 disposals, 26 hitouts, 8.5 hitouts to advantage, and 4.6 clearances. Big Max plays like an extra midfield ball-winner at times, and like a full forward at others. He can do it all, and that is what makes him the best. In a close game, ruckwork efficiency might decide the winner.

Melbourne go in as slight favourites here, with online bookmakers setting the line at a skinny 1.5 points. The Dockers have the home ground advantage, and based on form, these teams are impossible to split. The game will decided purely on who brings the heat on the night. We are expecting a close game with a finals-like intensity. For that reason, we are looking at the tri-bet option on Palmerbet and backing either team to win under 19.5 points, which is paying $1.90. This appears the safest route in a very tricky game to judge. The total points line is a low 146.5, suggesting a competitive, low-scoring affair that should be decided by a narrow margin.

Either team by under 19.5 points

For those uninspired by even-money bets, we suggest some creative additions to add value to this contest. We will be linking either team under 19.5, into Kysaiah Pickett anytime goalscorer, into Michael Walters anytime goalscorer. This triple-header will return a more attractive $3.77 courtesy of Palmerbet.