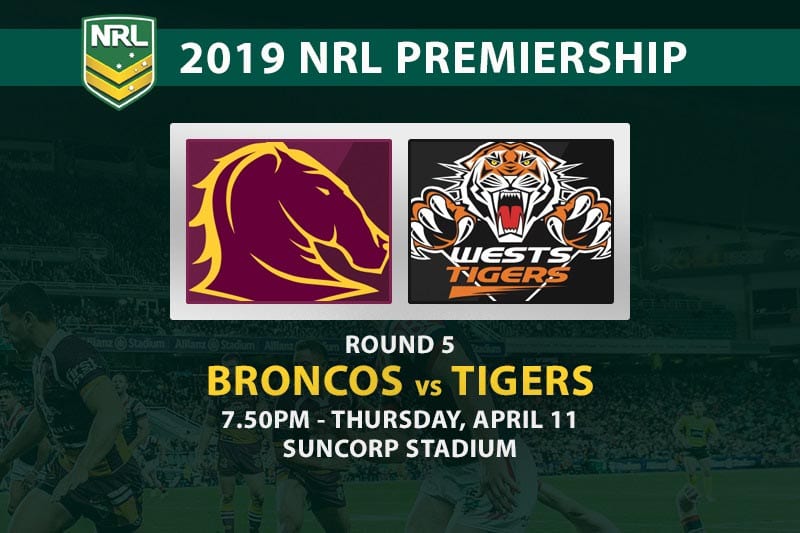 Brisbane Broncos – $1.45 at Sportsbet
Wests Tigers – $2.75 at all our trusted online bookmakers

Two teams looking to bounce back sharply after disappointing defeats kick off round 5 this Thursday night at Suncorp Stadium.

Many expected a much better performance from the Brisbane Broncos after their narrow loss in round 3 against the Dragons, but the polar opposite happened last week against the reigning premiers.

The Sydney Roosters put the hurt on the Broncos, scoring four tries to none in the first half to completely snuff out any fight from the visiting Queenslanders.

The loss leaves the Broncos with just one win from four games.

It was a case of what could have been for the Wests Tigers last week.

After dominating the contest against Penrith for the majority of the match Wests failed to put their opponents away and paid the price.

The biggest issue for Wests is their scoring.

The Tigers’ defense has conceded the second least amount of points in the competition but they have the second worst scoring output of any team inside the top 10 in 2019.

We’re proposing that Corey Oates changes his nickname to “The Nightman” given how brilliant he is at Suncorp when the lights come on.

The Queensland State Of Origin representative has scored at least one try in each of his last eight games at home underlights and is currently the league’s most prolific try scorer with five so far this season.

For the Broncos to get the season back on track they’ll need The Nightman to cometh on Thursday and we’re predicting exactly that.

Best bets for Brisbane vs Wests

The Broncos season is slowly slipping away and the only thing that can arrest the momentum is a win on Thursday.

While they have been anything but a safe bet this season we have always felt like one win could turn their fortunes around dramatically. The scoring machine Corey Oates should be as dynamic as ever on Thursday and the stinging loss to the premiers should rev them into gear.

While the Wests have been better than expected to start the season if the Broncos scoring is on from the get-go like we expect we don’t think they can match them.

Back the Broncos in.

Corey Oates to score a try and Brisbane Broncos to win – $1.91 at Sportsbet