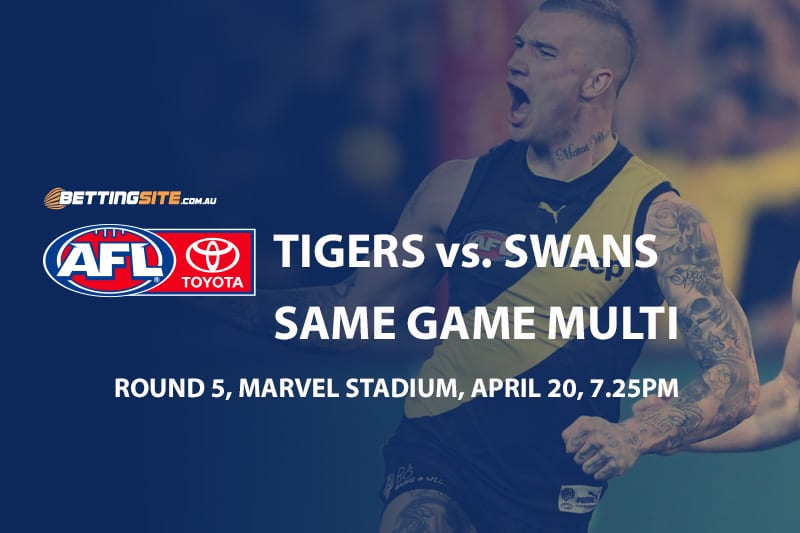 No match this Saturday is as big as the Richmond and Sydney encounter at Marvel Stadium.

Richmond is still playing without many of its star players, who are all injured, while the Swans are showing all the signs of a club on the way down the ladder.

With Lance Franklin in the twilight of his career and Josh Kennedy slowing down in the midfield, the Swans have started to blood many new players.

The Tigers have also been forced to give games to some of its youngest players, which proved to be a success in an inspirational win over Port Adelaide last week.

Richmond won the most recent clash against the Swans, but lost the two beforehand, with the 2016 margin exceeding 113-points.

Here is our same-game multi.

Although a lot of talent missed the match, plenty of players stepped up for Richmond, including Tom Lynch, who kicked six goals and Dylan Grimes who was fantastic in defence.

Tom Papley has made the move from the Swans forward line to the midfield, and has done so with great poise. He has found the footy 19 times twice this season and we’re expecting more midfield minutes and more disposals against an undermanned Richmond.

Jack Graham has been good, but not great this season, compared to how amazing he was during the Premiership run.

If Graham can find his previous form, he can easily get above 25 disposals, but the 20-disposal mark makes sense for the match-up with the Swans.

As a second-year player, Jack Higgins has made improvements to his game, especially in front of the goals. Higgins has kicked six goals in the first four matches and will add to his total this week.

Sydney has a good defence for stopping key forwards and slow structures, but it suffers against the opportunist type players like Higgins.

Oliver Florent had a breakout match for the Swans last week, kicking two goals from the midfield where he had 25 disposals. Matches like these transition average players into the next stage of their career, and as a third-year player, it’s time for Florent to start playing good footy.