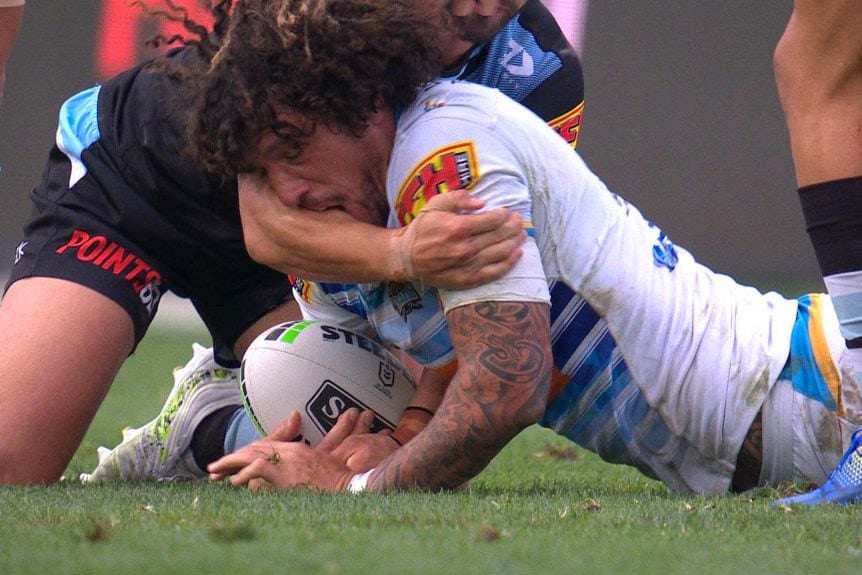 Round 14 of the 2020 NRL Premiership had plenty for fans to sink their teeth into – something Kevin Proctor took a little too literally when he was sent off for allegedly biting Cronulla’s Shaun Johnson.

While that incident tarnished the Gold Coast forward’s 250th game, there was no shortage of footy-related talking points to take out of the week just gone.

The Sea Eagles battled bravely, the Storm put forward their premiership credentials, the Broncos looked more like donkeys and Adam Reynolds once again pulled a rabbit out of a hat for Souths.

You never bet against a champion, but are the injuries becoming too much for the Sydney Roosters to overcome?

It’s estimated they had $4 million worth of playing talent missing on Thursday night as they were ground into the dirt by a sensational Melbourne Storm outfit minus the two Camerons in Smith and Munster.

It seems this year more than others the Storm have been slept on, which is crazy seeing as they are in a battle with Penrith for the minor premiership.

We thought Josh Addo-Carr and Suliasi Vunivalu were the best picks for a first tryscorer, but they were second and third with Vunivalu pulling up inches short in the fifth minute before Jahrome Hughes crossed the stripe first.

A night game at the SCG is a recipe for unders, which came in easily by 7.5 points, and well done to anyone who got on the Storm at $2.90 in the head-to-head betting.

The Penrith Panthers have now won a club-record nine matches in a row, going better than the eight games they won consecutively in 2003 when they charged towards a premiership.

They had to work for this one, but that says more about the Warriors’ improvement and Todd Payten’s coaching than anything else.

It looked at one stage Penrith would run away with the game at 16-0, but the Warriors refused to buckle and came close to causing the season’s biggest upset.

Unfortunately for us, the resilience of the Warriors mucked up our -18.5 prediction for the Panthers, while Brent Naden on the right side wasn’t among our first tryscorer picks.

Penrith still have just the one loss on their record and could very well finish that way, with Parramatta and Cronulla their only games left against top-eight opponents.

This result had been coming for a few weeks for the Parramatta Eels. They had won four of their last five games with scratchy form heading into this one, but this time they fell to a determined Dragons outfit who farewelled Illawarra legend Paul McGregor with a courageous win.

The 1-12 margin we got correct, but how many people expected the Dragons to cause the upset? One can only imagine how many NRL multi bets would have been spoiled by this result.

The loss all but rules out a top-two finish for the Eels, who now sit three points behind Penrith and two games clear of the fourth-placed Roosters.

The biting incident between Kevin Proctor and Shaun Johnson marred an otherwise entertaining contest at Kogarah.

It was another good performance from the Cronulla Sharks, who have quietly won four of their last five games. They sit seventh on the ladder and will be an interesting matchup in the NRL finals for whoever they face.

The Gold Coast Titans again showed improvement and were competitive for long periods, but the send-off ended any chance at a win. Getting home by the skin of its teeth was the 1-12 Sharks prediction for a $3.10 return.

Talk about a thriller! A 31-30 shootout up in the north made it a comfortable win for those who wisely took the overs.

Adam Reynolds was simply fantastic at the death, slotting yet another impressive field goal when moments before it appeared the South Sydney Rabbitohs would miss out on an important two points.

Their record against teams outside the eight is now 6-0 since the restart. All of a sudden their next clash against Manly shapes up as a critical encounter, as Souths could almost lock up a finals berth by putting a six-point gap between them and the Sea Eagles.

When the Canberra Raiders went into half-time trailing 8-6 on the scoreboard, there was a feeling our decision to give the Broncos a 29.5-point head start would not get close. The Green Machine came home with a wet sail to win the second half 30-0, but it wasn’t quite enough to cover the adjusted line.

And did anyone take the Raiders to win between 31-35 points at $13? The final 15 minutes would have been tough viewing as Canberra couldn’t rack up the extra try needed to reach that margin.

We all know the depths of Brisbane’s despair in 2020, and there will surely be more money coming in for them to win the wooden spoon. A dreadful second half and a brief lead from the Bulldogs momentarily put them in last place on the live ladder.

The Broncos face the Dragons next week in a game they should probably lose, while Canterbury have a golden chance against the Warriors to get off the bottom of the ladder. Imagine what price you could’ve got in February for Brisbane to win the spoon…

What a sensational game of footy this turned out to be!

The desperate Sea Eagles raced out to a 12-0 lead, but the Newcastle Knights ran in five tries to snatch a two-point win and keep their top four hopes alive.

Those who backed Hymel Hunt to score two or more tries will feel robbed, as he was denied a hat-trick by two Kalyn Ponga forward passes.

Last week we didn’t like how short Newcastle were for this contest, and their performance today showed punters they shouldn’t always trust them against weaker opponents.

Manly were gutsy and almost pulled off a sensational win, but their season goes on the line against Souths this week.

The Wests Tigers surrendered a 16-0 lead to the bottom side to trail 28-22 with 10 minutes remaining, needing some Benji Marshall magic and the steady hand of Luke Brooks to get them home and keep them alive for at least one more week.

How their fans must have been feeling when they fell behind is almost difficult to comprehend considering they were the $1.42 favourites, which we suggested was fraught with danger.

Remember when we said Luciano Leilua at $19 was awesome value to score the first try? He bursted through a gap in the sixth minute and looked certain to score, only to offload to Moses Mbye a metre from the line.

Yes, it was unselfish, but for just once, Luciano, you should have held onto the pill. Justice payout, surely?