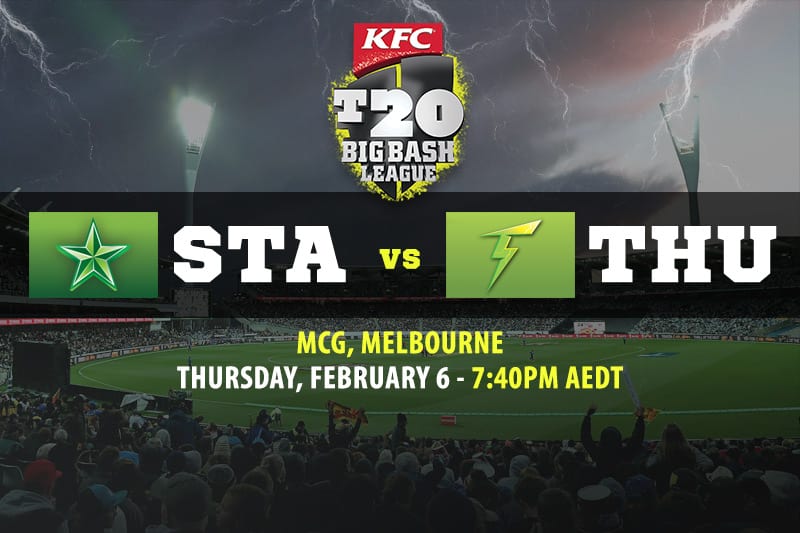 The stakes could not be higher for this Big Bash League knockout clash between the Melbourne Stars and Sydney Thunder at the MCG.

The winner will go on to face the Sydney Sixers in the BBL Final at the SCG on Saturday, while the loser will bow out of the title race.

The two teams have taken different roads to reach this point. The Stars finished top of the BBL ladder but stumbled into the finals, while the Thunder have won through from fifth place after starting the season at the longest odds to win the championship.

The top two runscorers in the league will go head-to-head when Alex Hales attempts to topple Marcus Stoinis, who has a 54-run buffer on his English counterpart.

This guy is a machine at the crease. Very few players can hit as many boundaries as Marcus Stoinis, while none have scored as many as his 614 runs this season. The pressure of finals may have got to the Stars opener when he holed out early against the Sydney Sixers last Friday, but the Thunder will have to bowl out of their skins to keep Stoinis quiet.

There are three Thunder players that are realistic candidates for top runscorer: Usman Khawaja, Alex Hales and our choice for this match, Callum Ferguson. The Thunder captain has dropped off in the past few matches and will need to lift for this one. Ferguson made 35 in his last contest with the Stars and will top that mark in this final.

His BBL season was shortened due to Australia’s ODI tour of India, but Adam Zampa has still taken 16 wickets in his 10 games. The Thunder targeted Zampa when they last faced the Stars, but the MCG’s long boundaries will keep batsmen in check and give the talented leggy some wicket-taking opportunities.

No player in BBL09 has been as effective as Daniel Sams when it comes to dismissing batsmen. The Thunder seamer has taken 30 wickets in 16 games, averaging almost two wickets per outing. Sams ousted Nick Maddinson, Glenn Maxwell and Ben Dunk last time he took on the Stars and will come in with a head full of steam after snaring five wickets in his last seven overs.

The last four Melbourne Stars’ performances have been abysmal, but with everything on the line without a second chance, we think they will get everything back on track and win this match. All it takes is a big performance from one individual for the Stars to win, and they have a handful of players that can win the game with their next-level ability.