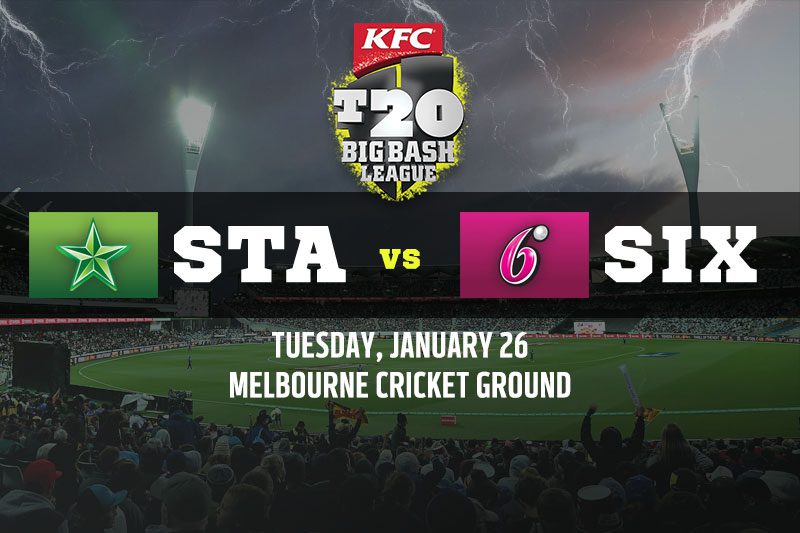 The BBL10 regular season comes to a close this Australia Day as the Melbourne Stars take on the Sydney Sixers at the MCG.

Most of the pressure will be on the Stars, who sit seventh on the ladder and must win to have any chance of featuring in the playoffs.

A different type of pressure will be affecting the Sixers, as a win could see them usurp the Perth Scorchers as the top seed heading into the finals.

Moises Henriques and Sean Abbott are back for the Sixers after spending time with the Australian Test squad, bringing an enormous amount of experience and skill with them.

The last BBL10 regular season match will bring a post-season intensity to the MCG, where last summer’s grand finalists could produce another ripping contest.

Although he hasn’t been amazing in his last few contests, you can expect big things from Marcus Stoinis against the Sixers. The hard-hitting allrounder has produced some big scores against the Sydney squad, including his unbelievable 147* off 79 last season. One more big innings from Stoinis could lift his team into the finals.

After missing three matches for the Sixers, Ben Dwarshuis returned with 3/38 against the Thunder and backed it up with 2/39 against the Hurricanes. With Sean Abbott back by his side, the left-arm quick may benefit from greater pressure being applied at the other end. Dwarshuis has 14 wickets in nine matches this season, so there is no doubting his ability to rack up multiple poles in a game.

Even when the Melbourne Stars totalled 193 runs against the Sixers earlier in the season, the Sydney squad still managed to win the match. Henriques brings more stability to the top order, while Abbott will be rearing to go after spending most of his time with the national squad on the bench.