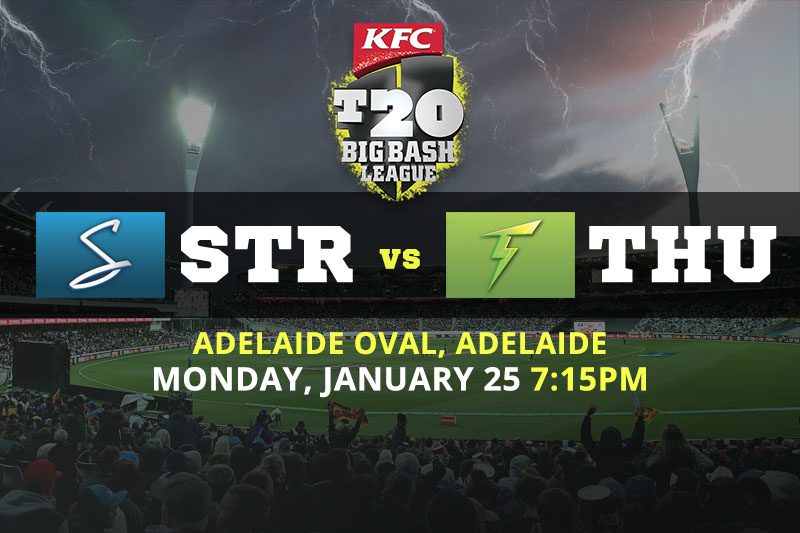 The Strikers have had the finals chances boosted in recent days with the return of Travis Head and Michael Neser from international duties, and have also regained Peter Siddle from a hand injury. The Strikers are currently 5th on the BBL10 table, and will need to win one of the two games against the Thunder to round out the round robin season to secure a spot in the BBL10 finals.

Arguably, the Sydney Thunder have the most dynamic top order in BBL10. Usman Khawaja and Alex Hales provide the Thunder with explosive starts each game, and then the experienced duo of Callum Ferguson and Sam Billings know how to pace an innings like you would not believe. They have all but secured a spot in the finals series, and will look to push for a Top 2 finish with only one point separating them and the Scorchers.

The Sydney Thunder match up incredibly well against the Adelaide Strikers having won three completed matches in a row against the Strikers. Having demolished the top of the table Sydney Sixers on Friday night, thanks in largely to a century from Alex Hales, the Thunder look to have got their BBL10 season back on track and will be pushing hard for all four points in a bid to finish in second for the all important second chance in the finals.

The classy left hander has had a consistent BBL10 season so far, but Usman Khawaja strangely enough is yet to raise his bat for a 50 so far. He averages a tick under 25 this season, but everyone knows how good Uzzy is at the top of the order in white ball cricket. He gets a pitch at Adelaide Oval which is always batsman friendly and look for him to build up some form leading into the finals.

The next-in-line for Test duties Alex Carey has easily been the star performer for the Adelaide Strikers in BBL10. He has smashed 381 runs in BBL10 at an average of 38.10 which included 101 against the Brisbane Heat last week. Heading back to the top of the order will only help his cause in a quest for more runs.