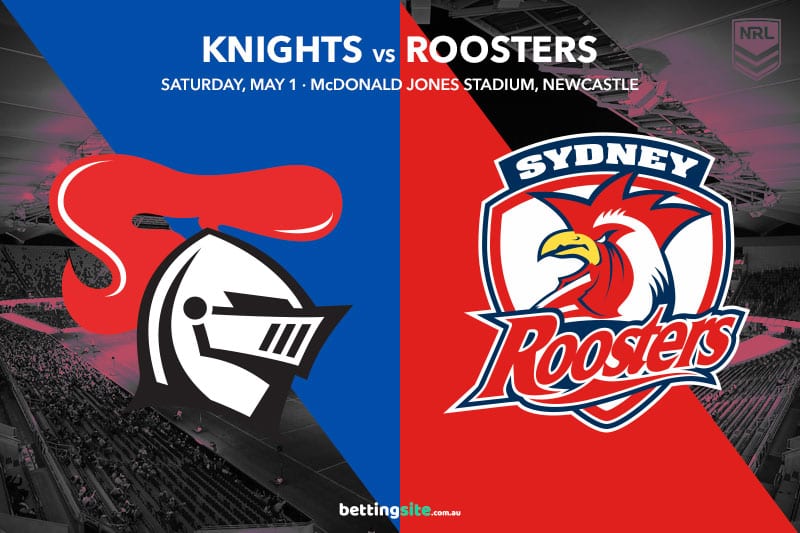 The Newcastle Knights return to McDonald Jones Stadium this Saturday night, and they’ll need their legion of diehard fans to make all the difference when the Sydney Roosters take the field in round eight of the 2021 NRL Premiership. James Tedesco’s concussion is going to leave him in doubt until game day, and his absence would rob the fans of a terrific positional matchup with Kalyn Ponga. Newcastle will get Lachlan Fitzgibbon and Bradman Best back in their side, but they’ll need to improve dramatically in attack if they are to make a game of it against the Roosters.

The $2.70 for the Knights to win feels short. If not for a Kalyn Ponga miracle try in their last home game, they’d be staring down the barrel of losing six in a row. Just how they find a way to beat the Roosters is boggling the mind, so let’s look to some value for the tryscorers.

Bradman Best at $15 looks the best option in the first tryscorer market for Newcastle on his return to the top grade, as his brute strength close to the line may trouble Joseph Manu. Ponga at $2.50 is the best pick to score a try. The Knights are limited in attack, and unless it’s Ponga creating something, they don’t look like scoring. Kurt Mann at $5 is well worth a look for a try at any time, as he was outstanding against Penrith despite being on the wrong side of the score line.

The -6 handicap for the Sydney Roosters is a gimme, so make sure you’re all over that one. The 13+ margin at $2.80 also looks to be the way to go, as Newcastle have shown they cannot keep up with good sides for the entire 80 minutes. The Roosters may have lost their last visit to McDonald Jones Stadium, but their overall record against the Knights makes them hard to ignore.

Sam Walker has filled the halfback void left by Luke Keary’s injury better than anyone could have hoped, and the $5 quote for him to score at any time should be looked at. Brett Morris at $8 is the hot tip to score first; the Knights’ defence of the left edge has had some issues in 2021, and BMoz is exactly the guy who is going to finish off a half-chance. If Tedesco takes his place in the starting side, the $2 for him to cross at any time is a great way to boost any same-game multis.

With James Tedesco in doubt for the game, it’s hard to dive into a possible date with Kalyn Ponga. Both teams boast big forward packs, but the smaller men in Connor Watson and Victor Radley play pivotal roles for their respective clubs. Watson has been a revelation moving into the forward pack, as his speed around the ruck creates headaches and his relentless energy is an inspiration to his teammates. Radley has proven to be a clever ball player and one of the best tackling technicians in the entire competition, and one could argue he is one of Sydney’s most valuable players. These are two completely different lock forwards, so it should be a fun battle to watch.

The Roosters will prove to be a class above and win by more than 13 points. What more needs to be said?

Roosters 13+ with Brett Morris to score the first try at $14.50 could kick start your Saturday night in style!