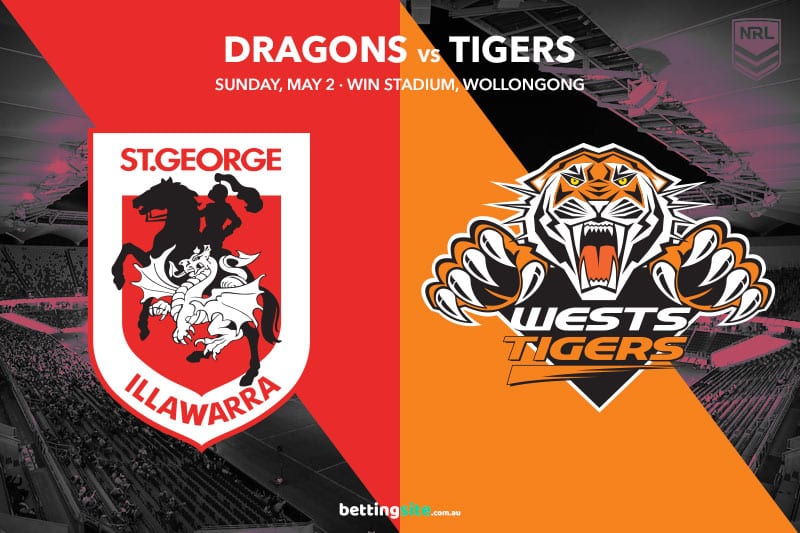 Round eight of the 2021 NRL Premiership concludes down in Wollongong this Sunday afternoon as the Wests Tigers attempt to resurrect their season with a win against the St George Illawarra Dragons. The NRL coaching future of Michael Maguire has come into speculation as the Tigers endure their worst start to a season in the history of the joint-venture, so will the Dragons be lulled into what they think is an easy game but end up facing a team ready to fight for their season?

The Saints will welcome back skipper Ben Hunt after recovering from a broken leg, while Max Feagai will play his first game on the wing to replace Mikaele Ravalawa, who was suspended for a shoulder charge. After making some changes to the spine before their game against the Roosters, Anthony Griffin appears to have gone back to the brains trust who engineered four-straight wins before it back-fired on ANZAC Day.

Mikaele Ravalawa’s suspension takes a potential favourite out of the tryscorer betting markets, and his replacement, Max Feagai, is $9.50 to get the first ‘meat pie’ for the game. Zac Lomax at $10 is another good option for the St George Illawarra Dragons if you believe he will have a bounce-back game, but Tariq Sims at $23 is a good pick if you want to really go the whole hog. A Lomax brace at $6 should also draw some attention.

The money appears to be flowing for the Dragons 13+ margin at $2.10. However, after such a week of turmoil for the Tigers, eventually they have to stiffen up their defence. We think that happens this week, making the $3.10 for a 1-12 win to St George Illawarra more palatable.

A shocking number has emerged for the Wests Tigers. In 15 of their last 16 games as the underdog, they’ve lost. They’ve done nothing to change the narrative that they are a walkover for most teams in the league, and it’s hard to see them not falling into wooden spoon contention if they don’t turn things around ASAP.

After so much media attention on their club, there has to be some type of response. Wests will get closer to a win than many think, so the +10 line at $1.90 has plenty of appeal. Daine Laurie at $2.88 and Adam Doueihi at $5.50 shape up as the best anytime tryscorer options.

Zac Lomax is in line to make his State Of Origin debut later this year, and he has the perfect chance at home this Sunday to further his claim with a bounce-back performance up against Joey Leilua. Leilua was dropped earlier this year after one of the worst defensive displays seen by a player at NRL level, and he is the key man in the defensive line against the Dragons’ most potent edge. Just how does Leilua slow the likes of Lomax and Matt Dufty down on that side of the field? The Dragons will get a lot of their points down that side unless Joey steps up.

The Dragons will win the game, but the Tigers will have moments where they threaten. The value is with the 1-12 margin.

Zac Lomax wasn’t at his best last week, but we are backing the Saints centre to score a double on Sunday and vault himself into the State Of Origin mix.

Dragons 1-12 with Matt Dufty and Tariq Sims both to score at any time can get a tidy $35 price at Sportsbet.