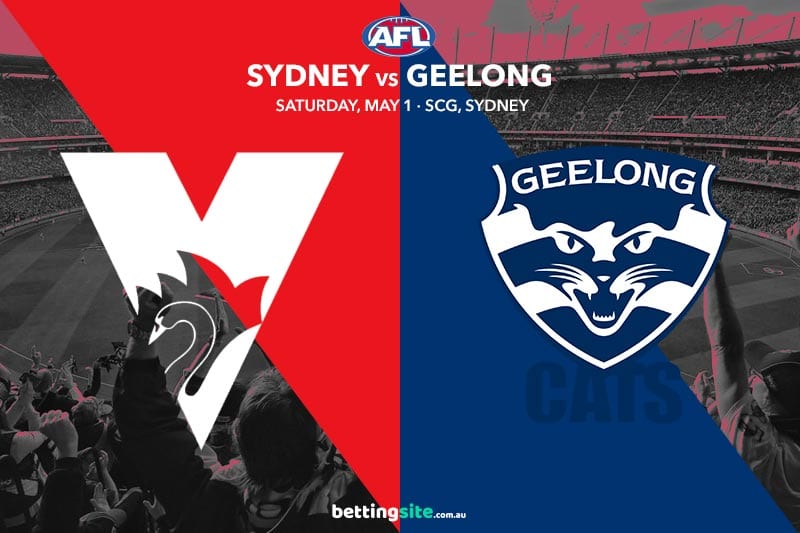 The Sydney Swans will host Geelong at the SCG on Saturday night in a blockbuster clash between two AFL finals contenders.

John Longmire and his Swans will be looking to stop the slide after two consecutive losses, while Chris Scott and the Cats will travel to Sydney hoping to build on their dominant win over the Eagles last weekend.

Online bookmakers have Geelong as $1.47 favourites, while the Swans are offering a bit of value for the upset as $2.75 outsiders.

The Swans are on a two-game losing streak and will appreciate getting back to the SCG, but it will be an uphill battle with Dane Rampe, Lance Franklin, Sam Reid, George Hewett and Tom Hickey all missing this week through injury. With those big names out, Sydney will need some strong performances from their bottom six, especially Will Hayward. The consistently inconsistent forward was close to best on ground when the Swans last played at the SCG, booting three goals against the Giants. Odds of $3.40 are on offer at Sportsbet for Hayward to kick two or more goals on Saturday night.

The Cats head up to NSW on the back of an impressive 97-point win over West Coast. It was an utterly dominant display over a genuine contender as Jeremy Cameron made his long-awaited Geelong debut. Jezza kicked three goals against the Eagles, and at $2.60 to repeat that effort at the SCG, the former Giant looks a nice bet on Saturday night.

Josh Kennedy and Joel Selwood will go down in AFL history as two of the toughest nuts to have played the game. Kennedy was the lone shining light in the Swans’ loss to the Suns last weekend, accumulating 42 touches, while Selwood enjoyed being back in the midfield, racking up 29 of his own. Both players will be integral to their team’s chances on Saturday night, and neither will shirk away from the task at hand.

Despite the Cats flexing their muscles last week, and the Swans proving woeful on the Gold Coast, we expect this to be a tight contest throughout. The Swans will be licking their wounds after starting the season 4-0 and now find themselves 4-2 heading into Saturday night. However, the attacking prowess that Geelong have to their name right now led by Hawkins, Cameron, Rohan plus a midfield group who consistently hit the scoreboard. The Cats look to have too many answers for the Swans and should be heading back to the Cattery with the four points.

To get 30+ disposals: Mitch Duncan

Mitch Duncan was best on ground in the Cats’ win over West Coast last week with 26 disposals and four majors. Duncan has only crossed the 30-disposal mark on one occasion, which was back in Round 3 against Hawthorn. With hauls of 27 and 26 touches in his last two games, we are expecting Duncan to continue his red-hot form and have a case of leather poisoning on Saturday night.

Geelong come into this game as red-hot favourites, but with little value to be found in head-to-head markets, the Cats by 1-24 looks the smart play. Mitch Duncan and Jeremy Cameron were both superb last weekend against the Eagles, and we expect them to continue that form against Sydney. Will Hayward was a shining light for the Swans the last time they were at the SCG, and he could play a crucial role again this weekend.