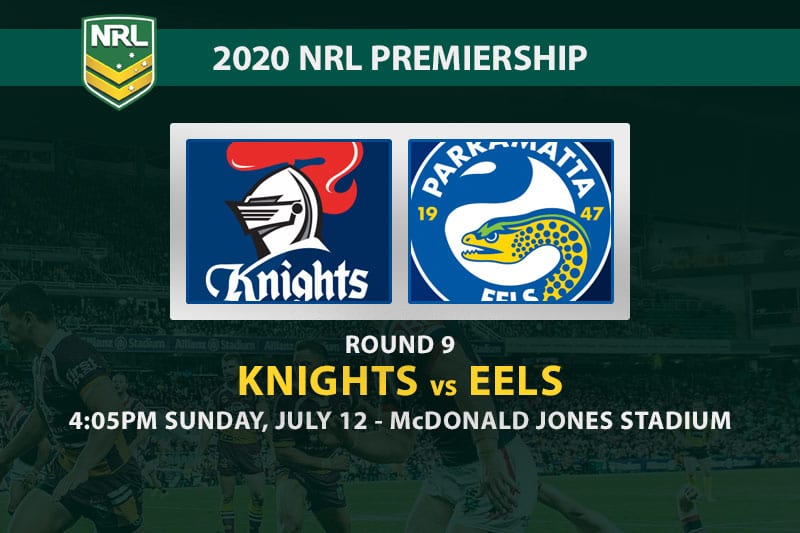 If the Saturday night feature between the Raiders and Storm isn’t enough for you, then this Sunday afternoon blockbuster might knock your socks off.

The Parramatta Eels are flying high with just one loss so far in the 2020 NRL Premiership, and that came against the title-favourite Sydney Roosters.

The Newcastle Knights are having a good season themselves, losing just two games in their first eight, but their 0-26 start against the Cowboys in round seven looms large in the memory.

The Knights come into this game as the home underdog at $2.40, in from $2.50 earlier in the week, while the Eels hold the favouritism at $1.65 despite losing nine of their last 12 games in Newcastle.

This will be the home side’s first game at McDonald Jones Stadium since round one back in March, and you’d have to believe they’ll be emotionally fired up for the clash with Parra.

Unfortunately, Newcastle will be without Edrick Lee on the left wing for an extended period after he broke his arm at Lottoland last Sunday.

Tex Hoy has been named in his place, but expect livewire youngster Starford To’a to move from the bench to the starting 13 when teams are confirmed before kickoff.

To’a is priced as high as $26 to score first try on Sunday, and it may be worth throwing a few bucks down on the junior Kiwi international before the NRL bookies cotton on.

The Knights 1-12 at $3.50 as the home underdog is a good price and shows many people believe they are a genuine chance.

Parramatta will once again be without Mitchell Moses at halfback and will have Jai Field deputise in that role, so Newcastle could have better production from the middle with Mitchell Pearce putting the strings.

The level of competition will rise considerably for the Eels with the Knights boasting a much stiffer defence than the Cowboys away from Townsville, which will put more pressure on Dylan Brown to create chances.

Eels winger Maika Sivo was $15 in the top tryscorer futures market a few weeks ago and after bagging four last Friday night, he comes into this game at $8.50 to score first and $5.50 to score a double.

Best bets for Knights vs Eels