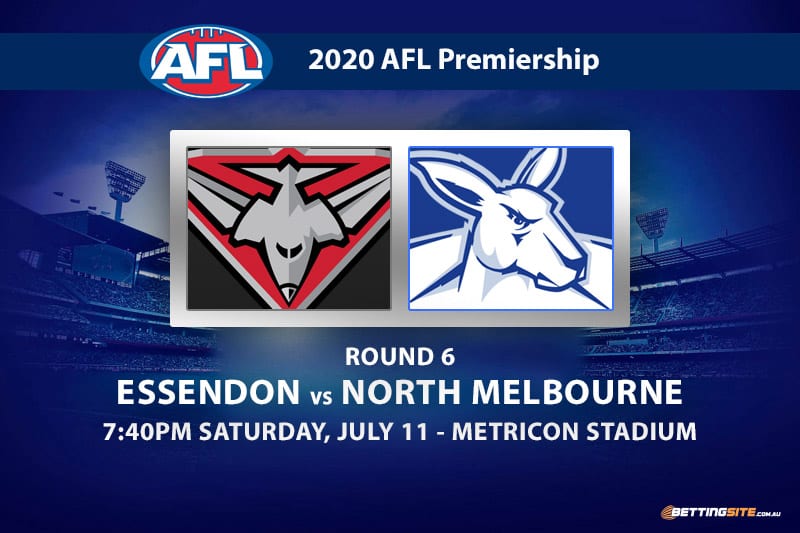 Saturday night clashes don’t get much bigger than matchup between archrivals Essendon and North Melbourne, who are both hubbing on the Gold Coast due to the COVID-19 situation in Victoria.

Jake Stringer went down with a serious syndesmosis injury in the Bombers’ win over the Magpies, meaning the star forward could miss up to eight weeks of footy, but the Kangaroos aren’t without their own injury issues.

Ben Cunnington has been battling back soreness all season and will likely be on the fringe of selection again this week, while Shaun Higgins (knee) and Tarryn Thomas (concussion) will need to prove their fitness.

The Dons have won their last four matches against the Roos, which will give John Worsfold, Ben Rutten and co. great confidence heading into this clash at Metricon Stadium.

Dylan Shiel is one of the best accumulators in the competition right now, averaging an impressive 26 touches per game despite the shorter quarters. Zach Merrett’s return to the squad this week could take some of North Melbourne’s focus away from Shiel, who starred with 29 disposals and a goal in the win over Collingwood.

Ruckmen have enjoyed playing against the Bombers in recent years, as the fitter, more mobile types have often found a lot of space around the ground. Todd Goldstein is averaging 17 touches per game in 2020 and kicking more goals than usual. Andrew Phillips did a decent job for the Dons against Brodie Grundy last week, but Goldy has the engine to wear him down over four quarters.

Someone needs to stand up for the Bombers in the absence of Jake Stringer, and Jacob Townsend might be the man for the job. The former Giant and Tiger could become more of a focal point in Stringer’s absence and spend more time playing out of the goal square. Townsend has five goals for the year and should add to that tally this weekend.

Having kicked 16 goals – including two bags of six – in his last four matches against the Bombers, Ben Brown looms as a huge threat on Saturday night. There is a chance that Essendon will throw Cale Hooker forward to bolster an injury-hit forward line, which would give Brown a favourable matchup on Michael Hurley or Aaron Francis.

High scores are the norm whenever Essendon and North meet, and this should be no different. We can see both teams scoring over 60 points in a fast and free-flowing match in ideal conditions on the Gold Coast. The Roos were held to only 38 points last week, but we expect them to bounce back and make this an eye-catching contest.

If the Bombers can beat the Magpies after conceding the first three goals of the match, they should have what it takes to topple the Kangaroos. We think Essendon will have a much easier time against North Melbourne this week and start hub life on the Gold Coast in winning fashion.