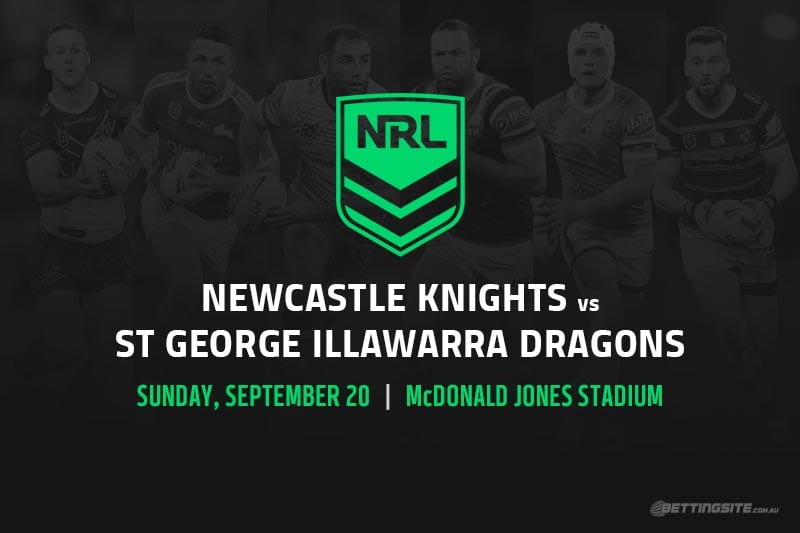 One of the NRL’s big myths is that the Newcastle Knights don’t lose on Old Boys Day.

They have one win since 2014 on the club’s most important day, but that trend will be bucked this Sunday afternoon.

They were horrible against the Roosters and blown off the park inside the opening 20 minutes, but rebounding from bad losses has been a strength of Newcastle’s this season.

A win this weekend would give the Knights control of their destiny and a chance at a home final, which would be a fantastic result for the club after years of misery.

The $1.33 is short for the Novocastrians, but they have won four in a row on their home track.

The St George Illawarra Dragons have an outstanding record in Newcastle, losing just four games in the Steel City since 1999.

The last time they played Newcastle on Old Boys Day, however, resulted in a 40-10 loss in 2014, by far their worst effort in the Hunter.

The Saints are $3.55 to get the win on Sunday afternoon, and you’ll understand why when you look at their results in 2020.

They have won just 25% of their games against top-eight teams this season, and their biggest win in such games came all the way back in round five against Cronulla.

Following their two most recent losses, Newcastle have bounced back and won by 40 and 28 points respectively, so the $2.30 for a 13+ win is probably the way many punters will go.

Last week we thought Cody Ramsey was worth a few dollars to score first, and his mates profited greatly by backing him. He is $14 to do the same this weekend.

Knights winger Edrick Lee will be in his second game back from injury and linking up with Kalyn Ponga once again, so the $8.50 favourite is a huge chance to score the first try.

Best bets for Knights vs Dragons