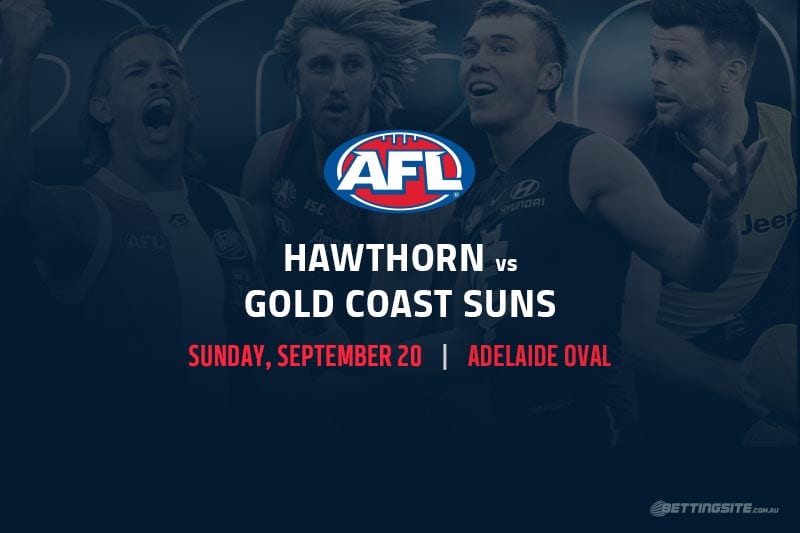 It’s all about the future for the Hawthorn Hawks and Gold Coast Suns as they play their final game of the wild 2020 AFL season.

Adelaide Oval has become the Hawks’ home away from home in the last month, yet they have lost all four matches at the venue.

The Suns took it up to Collingwood in round 17 and led going into the last quarter, but sloppy skills and poor finishing cost them in the end.

Sean Lemmens went off early in that game with a high-grade quad corky, but he can still get up for this match if he passes a fitness test during the week.

James Frawley and Tom Scully were late withdrawals from the round 17 squad for Hawthorn, but they both should be fit to play in their final game of 2020.

Ben Stratton and Paul Puopolo both announced their retirement during the week, so the Hawks will aim to send off their two premiership heroes in style.

Over the course of David Swallow’s 153-game career, he has made a habit turning it on against Hawthorn. It has been seven years since Swallow last recorded less than 20 disposals when facing the Hawks, as the tough midfielder has dominated the stat sheet in this matchup since 2013. In that time Swallow has recorded five games with over 25 touches and one impressive 34-disposal effort.

Alastair Clarkson has admitted that winning is not Hawthorn’s top priority right now, while Stuart Dew wants Gold Coast to end the season on a high note. Both sides have found it difficult to run out matches over the past month, but the talent of the Suns will overcome the older Hawks. Ben King should dominate the air with James Sicily out and Frawley under an injury cloud.