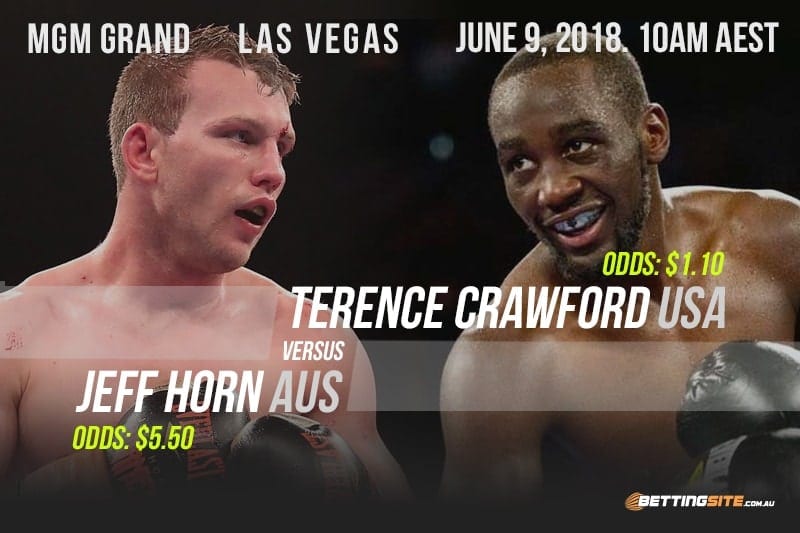 While the win over “The Pacman” was incredible, defeating Crawford is arguably a more daunting prospect.

Once rated as the no.1 pound-for-pound by the Boxing Writers’ Association of America (he now sits second behind Vasyl Lomachenko), Crawford is widely regarded as one of the best boxers on the planet.

The 30-year-old has an unblemished professional record and steps up a weight class after winning all four top titles in a light welterweight division, the first man to unify all the belts in any division in 12 years.

Crawford is the dominant favourite – despite being the challenger – and is expected to win. Outside Australia he is the main promotional tool for this fight and the majority of experts are anticipating another decisive victory.

Despite the odds being stacked against his favour, Horn believes he’s the man to beat heading into this weekend’s bout.

The Australian champion said he has a point to prove heading into his second WBO welterweight title defence.

“Terence is a great fighter, pound for pound, he wiped out the junior-welterweight division,” Horn said at the pre-fight press conference.

“But I can’t wait to get in there and prove the doubters wrong. I’ve heard I’m a chump, I’m a fraud. I’m here to prove people wrong.

“I’ve heard a lot about Terence and seen a lot of him too and I don’t think he’s fought anyone like me or with the same ability.

“I’m planning on going out and shocking him and the rest of the world.”

While many would feel the intimidation factor coming in against the 32-0 Crawford, Horn said there is no trepidation on his part coming into Sunday’s blockbuster clash.

The man they call the Hornet went as far to suggest the fight could be a “fast” one.

“I’ve really worked on my footwork so I plan to move really quickly against Crawford, changing angles. Changing direction, hitting from unusual angles, moving in and out side to side all the time.

“I did that against Manny Pacquiao when I won the title but I’ve taken it another level for this campaign.”

Ladbrokes is offering $9.50 if Horn can KO Crawford on Sunday.

Horn vs Crawford – who wins?

Can The Hornet produce another big-name upset and defend his WBO welterweight title?

There’s an old adage in boxing that dictates any professional has a “puncher’s chance” inside the squared circle, but there’s a reason Crawford is the heavy favourite coming into the bout despite being the challenger.

Horn’s win over Pacman was controversial at the time, and while the Aussie got the W next to his name, there’s no getting around the fact that Pacquiao was well past his prime while Crawford is fairly and squarely in the middle of his.

Despite Crawford stepping up a weight class to fight Horn, he actually has the reach advantage and is only an inch shorter. Horn will come into the fight heavier than the American, a fact he needs to exploit.

If Horn can maintain the pressure he did against Pacquiao and continually pepper Crawford with offence it could make for an interesting bout, but Crawford is the much more skilled fighter and we think he’ll easily account for the Australian on Sunday.