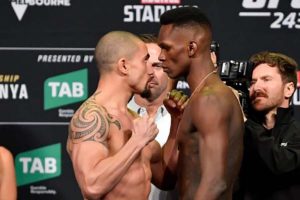 Israel Adesanya will meet Robert Whittaker in the octagon for the first time since he scored a knockout win over Whittaker at UFC 243 in 2019. The middleweight bout will serve as the main event of UFC 271 in Houston, Texas and will put Adesanya’s UFC Middleweight Championship on the line.

Israel Adesanya (21-1-0) cruised to an easy decision win over Marvin Vettori at UFC 263 in June, shaking off the first loss of his professional career that he had suffered at UFC 259 in March to Jan Blachowicz. Adesanya went up to light heavyweight for that fight against Blachowicz and didn’t put on much weight for the fight, valuing a challenge over keeping his perfect 20-0-0 record intact. The UFC Middleweight Champion has successfully defended his title three times with wins over Yoel Romero, Paulo Costa and Vettori since winning it from Whittaker and has been one of the most dominant forces in UFC history in this weight class.

Robert Whittaker (23-5-0) is without a doubt the best middleweight MMA fighter on the planet not named Israel Adesanya. Whittaker has earned unanimous decision wins in each of his last three fights over Darren Till, Jared Cannonier and Kelvin Gastelum since losing the UFC Middleweight Championship to Adesanya by knockout at UFC 243. The former champion is 12-1-0 since June of 2014, with the only blemish on his record over that stretch coming in the loss to Adesanya.

It’s worth noting that the last time Whittaker faced Adesanya, he did so off of a 15-month layoff. That’s a long time in between fights to try to shake off against an all-time great. Whittaker is healthier this time around and should have learned from his mistakes of the last fight in allowing Adesanya to keep the fight off the ground. Blachowicz was able to win his fight against Adesanya by grappling him and keeping him off of his feet. Easier said than done, sure, but Whittaker might be good enough to do it.

Whittaker was dealing with health issues prior to his previous fight against Adesanya and then burnout in the aftermath of it. After fighting his way back into title contention, we should see a much more game effort from Whittaker this time around. Will it be enough to secure the upset win? It’s hard to say; Adesanya has the clear edge in power and he just did a great job winning handily against a very strong grappler in Vettori.

The most likely outcome in this fight is Adesanya by knockout. But at these betting odds, we believe that Whittaker is a very live dog, and an upset win would set the stage for a thrilling rubber match between these two elite middleweights. It’ll take a near-perfect effort to stay out of trouble all night, but we think Whittaker has it in him.