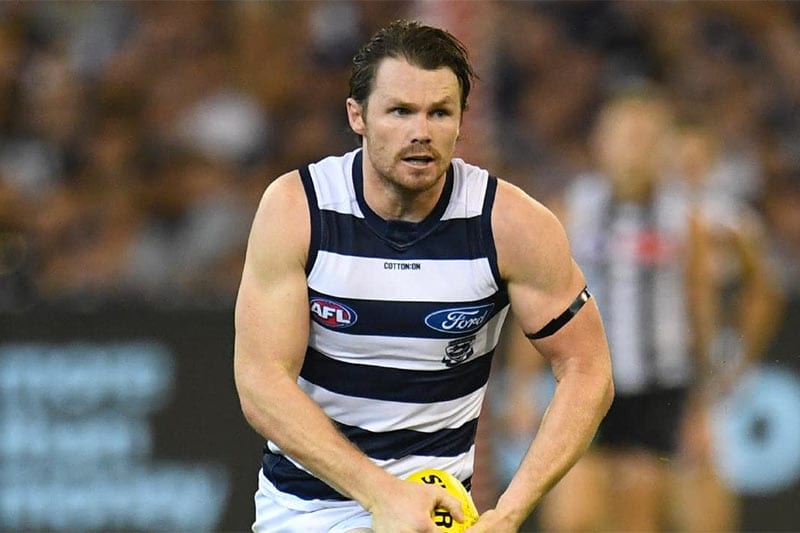 If nothing else, Mark Robinson knows how to spark a debate.

The Herald Sun columnist got tongues wagging on Monday when his newspaper published an article about problem gambling among AFL footballers.

In it, counsellor Jan Beames claimed that as many as 120 coaches and players in the elite Australian rules football competition are currently battling with gambling-related issues.

The AFL Players’ Association took a dim view of the piece, with president Patrick Dangerfield (pictured) saying Robinson and the Hun gave the organisation no opportunity to “put forward the different measures that we have to help support players”.

The AFLPA questioned the credentials of Beames, who has no formal qualifications in psychology or psychiatry, but Brisbane coach Chris Fagan and former Melbourne star David Schwarz both vouched for her experience.

“I have referred a lot of people to Jan and she knows what she’s talking about,” said Schwarz, who has battled gambling addiction since his playing days in the 1990s.

“She gets results — I think the players association calling her disgruntled is really unfair and quite nasty.”

Fagan called the gambling issue “the biggest thing we face in AFL football”, while former St Kilda star Nick Riewoldt believes the combination of young men and big salaries is a recipe for disaster.

“And it’s easy, it’s so accessible,” Riewoldt said on radio this week.

Problem gambling is a serious issue that affects millions of Australians, but it has not gone ignored by either the AFL or the wider community.

As Dangerfield explained, the AFLPA has an ever-expanding support network in place for players experiencing gambling addiction and other mental health issues.

Outside of football, the federal government recently enacted the National Consumer Protection Framework – a series of nationwide gambling reforms designed to curtail predatory marketing and dishonest practices in the Australian betting industry.

A core point of those reforms is the ban on bookmakers offering bonus bets or any other inducements as an incentive to sign up and start betting.

In Melbourne, where the majority of AFL players and coaches are based, a number of city councils are looking to weed out gambling from local clubs and pubs.

#BONUSBETBAN: WHAT YOU NEED TO KNOW

The City of Darebin recently took VCAT to court after the tribunal approved plans for more poker machines at a Preston RSL sub-branch, while Brimbank – which ranks among Victoria’s biggest pokies spenders – has jacked up rent rates for clubs that run gaming or wagering services on council property.

Combine all that with improving regulatory practices and the constant campaigning of the Alliance for Gaming Reform, and one could say there is quite a lot being done to protect vulnerable people from gambling addiction.

If that sounds trite or disingenuous, have a look at the situation abroad.

AFL miles ahead of UK football on gambling policy

In the professional leagues of English football, where players can earn more in a week than an AFL star does in a year, there is relatively little protection against problem gambling.

Indeed, it is common practice for clubs to throw their own employees to the wolves.

Many teams in the English Premier League, the second-tier Championship and beyond have official betting partners, while dozens of clubs even have bookies as their chief shirt sponsors.

Besides the obvious marketing benefits that come with such arrangements, the big win for gambling companies is prime access to young men who have a lot of time to kill and even more money to spend.

You would never see a bookmaker openly solicit business from an AFL player in this day and age, but that is a regular occurrence at club training grounds all over the UK.

That is what a serious gambling problem looks like.

So while it is one thing to say the AFL needs to do more about betting addiction, it is another entirely to suggest gambling is the single biggest issue facing the sport.

Besides, everyone knows the AFL itself is the worst thing about Aussie rules football today – bar none.