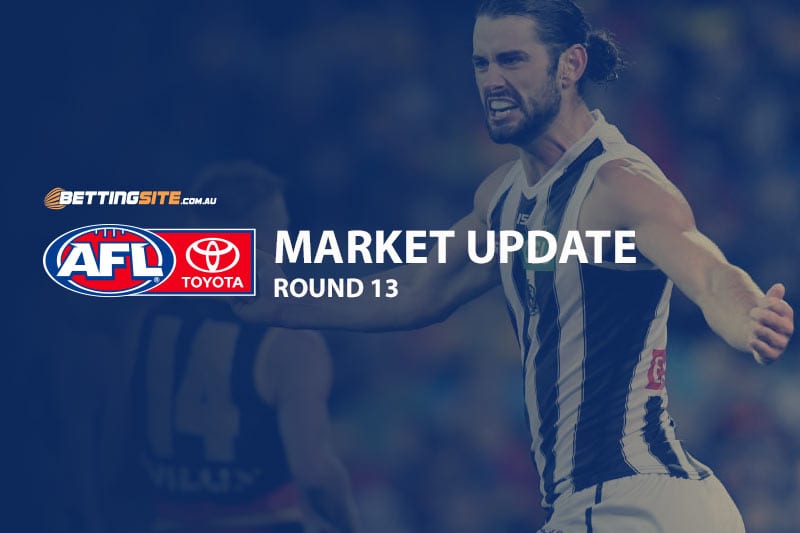 The second bye-round of the 2019 AFL Premiership season will be an interesting one to watch.

The six teams that will sit out in Round 13 are the West Coast Eagles, Sydney Swans, Brisbane Lions, Collingwood Magpies, Geelong Cats and Melbourne Demons.

With three of the top four sides resting this week, plenty of movement will occur on the ladder.

The Thursday night fixture is back on the cards with the Adelaide Crows hosting the Richmond Tigers. Besting the Giants last week has given the Crows confidence and the $1.34 favouritism at Sportsbet.com.au. Richmond is at long odds of $3.10

An age-old rivalry will come alight when the Bombers and Hawks battle at Marvel Stadium this Friday night. Both sides have been inconsistent this season and are coming off the bye last week. Essendon is slightly ahead in the match betting at $1.75, with the Hawks at $2.08.

Two teams in the lower reaches of the ladder will kickstart Saturday’s action with the Suns and Saints in Townsville. After starting the season with three wins in four games, the Suns have lost eight straight, giving the Saints $1.63 odds. GCS will enter the game at $2.25.

One match that will be highly anticipated is the Dockers and Power clash in Perth. Even without their full-back Alex Pierce, the Dockers are sitting at $1.72 for the win. Port Adelaide is well rested and will enter as $2.08 underdogs.

After winning last week and regaining the hope of their fans, the Carlton Blues will host the Western Bulldogs at Marvel Stadium. The Blues are still long odds at $2.50, giving the Doggies $1.51. Can David Teague get another win as Carlton’s interim coach?

The final match of Round 13 will be between the North Melbourne Kangaroos and the GWS Giants. Rhyce Shaw has won his first two matches as coach of North, who are paying $2.50 odds, but the $1.51 Giants will be hard to overcome.

A sixth premiership contender has emerged as the Adelaide Crows fall from $26 to $16 after upsetting the Giants. Richmond failed to fire a shot against the Cats, which has seen the Tigers move out to $13. The Brisbane Lions have also taken a hit, sliding from $26 out to $41 after their shock loss to Carlton.