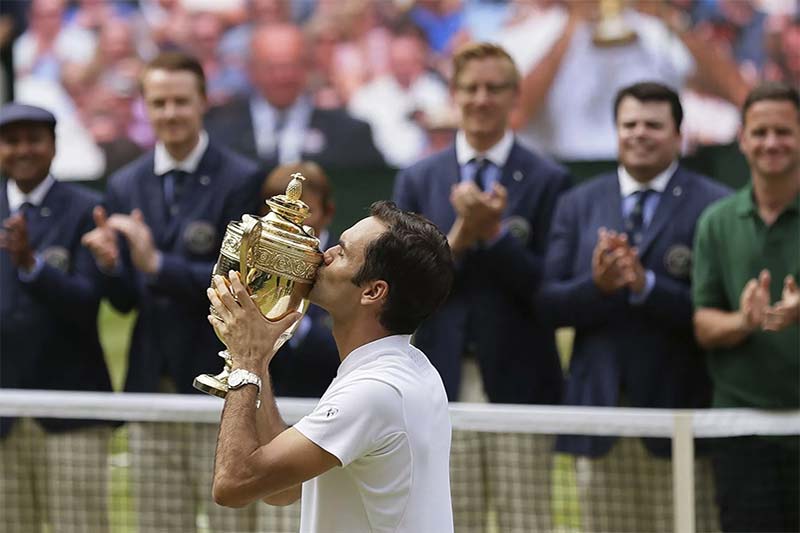 WORLD number one Roger Federer is the 2.50 favourite at online bookmaker Ladbrokes to defend his 2017 Wimbledon title heading into next month’s Championships.

No other player is in single figures heading into July’s tournament.

In 2017 Federer became the first man in 41 years to not drop a set at the All-England club in one of the most dominant performances at a Grand Slam tournament in modern history.

Online bookmaker Sportsbet has Federer as a $11 chance to go through the entire 2018 tournament without dropping a set.

The Swiss maestro claimed his 98th ATP title on Sunday after defeating Milos Raonic 6-4, 7-6 (7/3) in the Stuttgart Cup final as his Wimbledon preparations begin to ramp up.

Incredibly, this is Federer’s first Stuttgart in three attempts.

The 36-year-old believes he could not be more ready heading into next month’s Grand Slam.

“I’m just very happy how I played this week,” Federer said. “I never felt bad on the court, to be honest.

“That’s a very encouraging feeling. In the last couple of days I’ve not dropped serve.

“I was there in the most important moments, breaking Milos (in the first set) was a good effort. It’s been a great week for me.”

Federer has multiple tournaments prior to Wimbledon kicking off, but the world number one said his priority is to remain injury-free and primed heading to London.

“That’s the plan for now, for Wimbledon I still have time. I have a quiet pre-tournament week, not many things going on, which is fine.

“I just hope to stay injury-free and healthy.”

Wimbledon begins on July 2 from the All-England Lawn Tennis and Croquet Club in London, England.