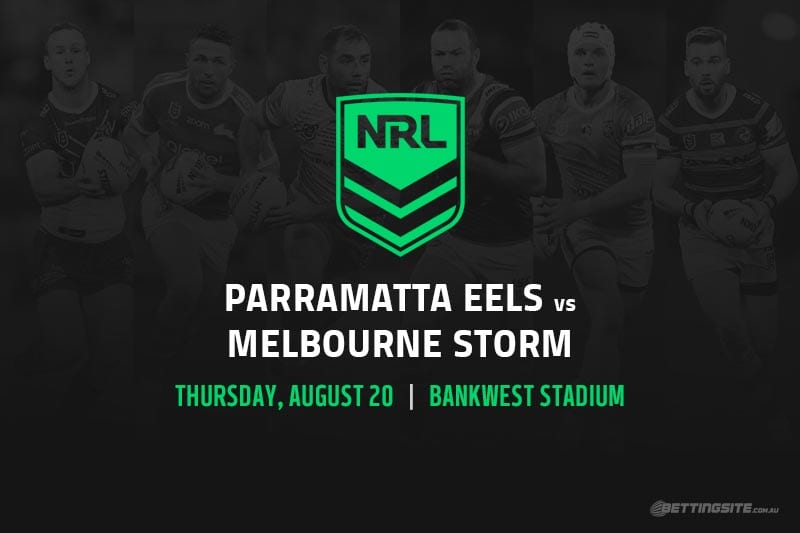 Talk about an absolute blockbuster to kick off round 15 of the 2020 NRL Premiership!

The new title favourites in the Melbourne Storm will travel down to Bankwest Stadium on Thursday night in what is shaping as the biggest test so far for the Parramatta Eels.

They were taken down 14-12 by the Dragons in a loss that had been coming for several weeks, and perhaps it came at the perfect time to give them a chance to sharpen up before tackling a top dog.

After they defeated the Roosters emphatically last week, the Storm are somehow the $2.35 outsiders with NRL bookmakers.

Melbourne will go into the match without Dale Finucane (calf) and Suliasi Vunivalu (jaw), while Cameron Smith (shoulder) and Cameron Munster (knee) are still sidelined.

Jesse Bromwich is also out after copping a ban for dropping his hip into Matt Ikuvalu last week, while Jahrome Hughes is named at halfback despite hurting his groin last week.

With his rival Fijian flyer out of action, Maiko Sivo will be a very popular choice at $8.50 in the first tryscorer betting.

While Parramatta’s record at Bankwest is fantastic, the Storm could play on the moon with three flagpoles in the backline and it wouldn’t change a thing for them.

Taking the Storm 1-12 at $3.50 looks to be a good shout, but there appears to be money flowing in for Parramatta 13+ at the same price.

Some of that is a belief in the ‘bounce back’ factor coupled with Melbourne’s key injury losses and playing top-four sides away in consecutive weeks.

Their two meetings in 2019 ended with the Storm 96-10 up on aggregate, so the Eels will want to put on a much better show this time around.

Best bets for Eels vs Storm