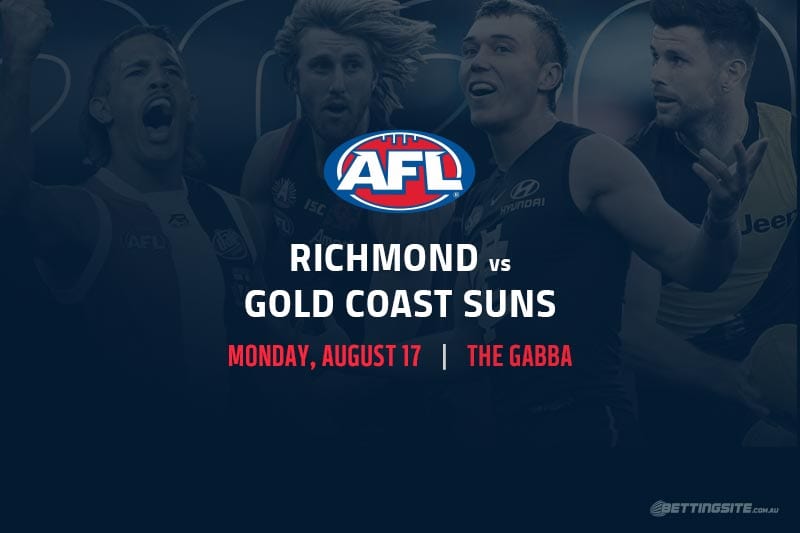 The 20-day festival of footy comes to an end on Monday as the Richmond Tigers take on the exciting Gold Coast Suns at the Gabba.

With young prospects such as Ben King, Jack Lukosius and the 2020 Rising Star favourite, Izak Rankine, the Suns have built a team that delivers highlights aplenty but hasn’t won in four games.

Although the Tigers were defeated by Port Adelaide last round, the reigning premiers are still in a great position to attack the finals.

The last meeting between these teams ended in a 92-point victory to Richmond, which kicked 23 goals in a dominant display.

Times have changed since that contest, however, as the Suns have been far more competitive this season and look poised to trouble some teams in the run home.

It only takes a split second for Dustin Martin to change the course of a game, whether that’s by kicking an outrageous goal or winning a big contest in the middle. The Suns utilise strong midfielders to bully their opposition around the stoppages, so we can expect Martin – who averages 30 touches per game in his last four against Gold Coast – to spend plenty of time in the guts.

Brandon Ellis will be facing his old teammates for the first time this week, and we think his game stacks up well against them. Ellis is a hard-running midfielder that creates distance between his opponents with smart movement, which will see him accumulate plenty of the footy if he matches up with the likes of Marlion Pickett on the wing.

We love the athleticism and skills that Mabior Chol brings to Richmond, as he holds his own in the ruck and offers a threat inside the forward 50. Jarrod Witts is a terrific tap-ruckman for the Suns, he is not the most mobile player going around and will struggle to stick with Chol as the game wears on.

There isn’t a more exciting player in the AFL than Izak Rankine, who continues to play good footy each week in his rookie season. Rankine uses his natural ability to find space inside 50, where he is an absolute nightmare to defend. Whether it’s on the ground or in the air, the Rising Star favourite should find a few chances to hit the scoreboard.

Both squads bring solid defensive units into this game, while Richmond could have the experienced Bachar Houli back in the mix after several weeks out. The Suns love to take risks going forward, but they might need to focus more on defence this week if they are to keep up with the defending champs.

Although the Suns have looked good in their last few matches, they haven’t won a game since round seven. The Tigers will bring a no-mercy attitude this week to make up for their loss against the Power, so we are backing them to cover the line.