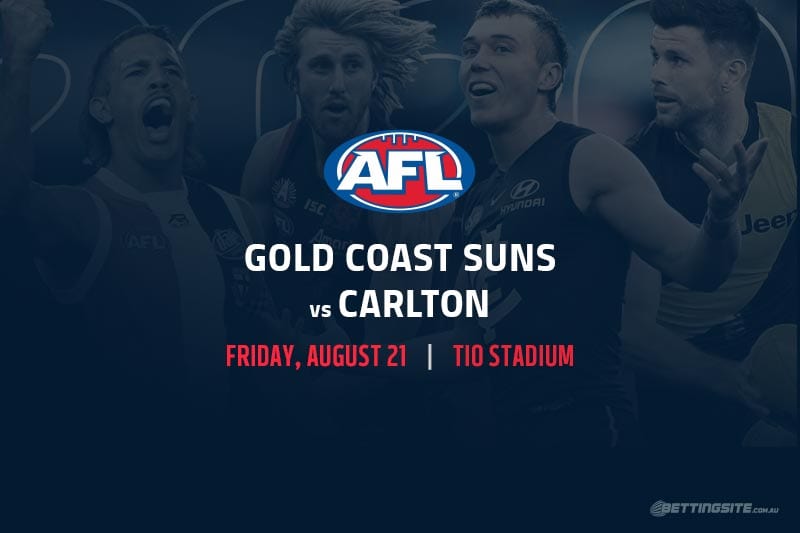 With the Footy Frenzy coming to an end on Monday night, we now have the chance to catch our breath and enjoy a three-day break before the opening game of Sir Doug Nicholls Round. For the first time this year, and the first time ever on a Friday night, the competition heads to Darwin, where the Gold Coast Suns will take on Carlton in what is a must-win game for both sides if they want to stay alive in the AFL 2020 season.

After taking it to Richmond on Monday night, could the four-day break prove a little too sharp for the up and coming Suns? They will welcome back seasoned duo David Swallow and Jarrod Harbrow, which will add a massive amount of experience to this Gold Coast side. On the side of the equation, you have the Blues coming off an incredible after-the-siren win against Fremantle on Saturday night. These two clubs often engaged in tight arm-wrestles, and bet they will want to put on a show after so many years without prime-time footy.

This may seem a little outlandish to some, but the $3 quote at some AFL betting sites makes it is hard to pass up on David Swallow racking up 25+ possessions on Friday night. The Suns responded to the tight schedule by wrapping their vice-captain in cotton wool for the clash with Richmond, which will have him fresh and ready to go off a nine-day break for this game against Carlton. He may only be averaging 17 disposals a game, but Swallow will want to help drag his side over the line in what has been an encouraging year for the Suns despite going winless since round seven.

One of the greatest indigenous players to have graced the game, Eddie Betts will look to light up the opening night of Sir Doug Nicholls Round with a bag against the Suns. Eddie has 32 goals from his 10 games against Gold Coast, and there is no reason why he cannot wind back the clock, put on a bit of a display and remind the footy world just how good he is.