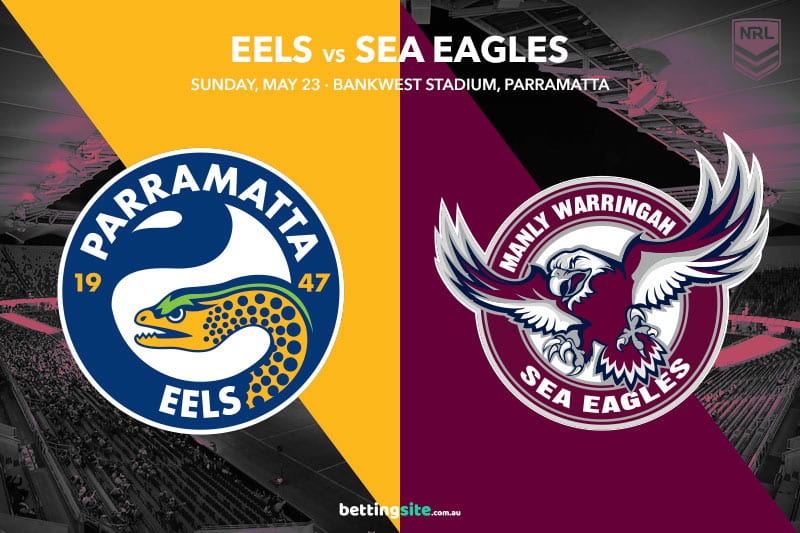 A classic NRL rivalry will be reborn on Sunday afternoon when the high-flying Parramatta Eels take on the Manly-Warringah Sea Eagles at Bankwest Stadium. The Eels are already looking for their 10th win this season, while Manly could move to sixth place with a win. The Sea Eagles’ stunning rise up the NRL ladder continued last week as they racked up 50 points against the Broncos, yet they come in as a $3 underdog thanks to Parramatta’s incredible form throughout 2021.

The Eels line of -6.5 feels like a great way to get a good return from backing a favourite with little risk. Only one game Parramatta have played this year has had a final margin which has fallen below that line, so the form is suggesting the Eels will cover.

Maika Sivo back at Bankwest Stadium is a tidy $7.50 at Sportsbet to get the first try. The Fijian flyer has notched the second try in three of his last four games, so he is due to cross the stripe first.

Mitchell Moses is having a great year, but he is yet to score a try. That is going to change sooner rather than later, so get on the $4.20 price while you can get it.

With Tom Trbojevic at the back for the Sea Eagles, Jason Saab at $11 to score the first try is a fantastic price that every Manly fan should throw some cash at. Tommy Turbo himself is still north of $2 to score at any time, and that chance to double your money feels like a bet you’d make seven days a week.

The Eels have scored at least 30 points in six of their last seven games, so even if you aren’t tied to a certain result, the overs line of 47.5 isn’t long enough. Manly have been the only team all year to score three tries against Penrith’s defence, so the $4.33 for a 1-12 win could well be the way to go if you fancy an upset.

Looking at the team sheets for both sides, the easy thing to do is talk up the battle of the fullbacks, but what about the halfbacks? Daly Cherry-Evans and Mitchell Moses have both been in terrific form and play just as big a role as the custodians in their respective sides. DCE in particular has found his long passing game to go with his terrific kicking game, while Moses’ short kicking has led to the Eels dominating field position in the back end of games. A warm afternoon should create an open game, so the halfback who brings their kicking radar will earn their team the win.

Parramatta should get the win in a high-scoring affair where the aggregate tops 50 points. We think the Sea Eagles will do enough to keep the margin to 10 points.

The $17 on offer for Parramatta at -7.5 line with Tom Trbojevic, Jason Saab and Maika Sivo to score a try could be the perfect end to Round 11.