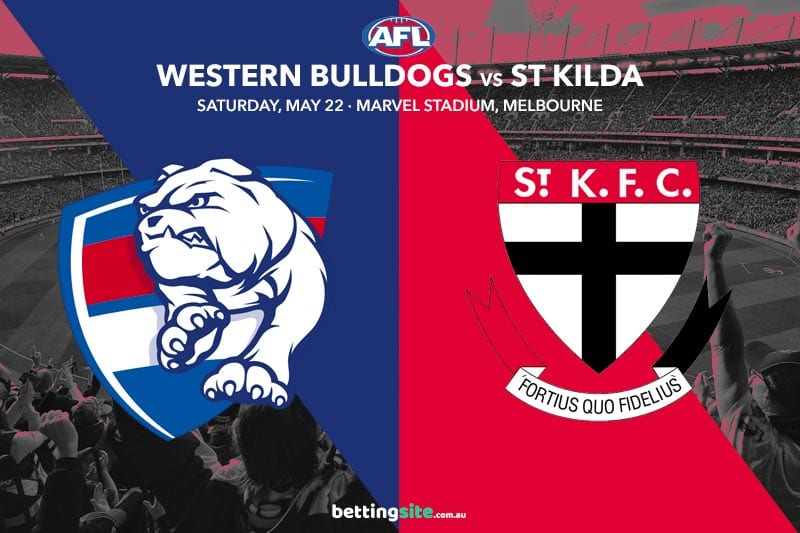 The pundits are tipping an all-action affair this Saturday night when the Western Bulldogs and St Kilda Saints do battle at Marvel Stadium in round 10 of the 2021 AFL season.

The Saints would have won against the Geelong Cats last week if not for a nightmare performance in front of goal, kicking 5.17 despite the perfect conditions under the roof at Docklands.

Travelling to the Adelaide Oval to tackle the Power is one of the hardest trips in the AFL at the moment, yet the Bulldogs did enough to claim an impressive 19-point victory in round nine.

Rowan Marshall has gone under the knife following another injury to his foot, ruling out the St Kilda ruckman for this clash. Meanwhile, the Bulldogs will welcome back their ruckman Tim English this week after finally overcoming his concussion from round six.

The Saints won both of their clashes with the Doggies in 2020, including their nail-biting elimination final decided by just three points. A lot has changed since then, however, as the Bulldogs sit second on the ladder while St Kilda occupies 11th place.

Almost all the Doggies’ midfielders are in excellent form, but there is one young gun to keep an eye on this weekend. Bailey Smith averaged 27 disposals against the Saints in shortened game-time last season, the most of any Bulldog across their two 2020 matches. Sportsbet.com.au is offering $1.91 for Smith to get 25 touches and $4 for him to break the 30-mark.

Josh Bruce currently sits equal-second in the Coleman Medal race, but will he show up against his old side this Saturday? Tim Membrey has an excellent record against the Bulldogs, having slotted seven goals in his last three games against them. The former teammates could each kick multiple goals under the roof at Marvel Stadium.

The Saints’ head-to-head form against the Bulldogs makes us want to believe in them, but without Rowan Marshall, Zak Jones and Jade Gresham, we will not take the upset. Marcus Bontempelli has carried the Bulldogs in their last two wins, and we expect him to dominate again this weekend. We have gone for the 1-39 margin since the Saints should be competitive following their slim loss to Geelong last round.

Bailey Smith to get 25+ disposals

Entering just his third AFL season, Bailey Smith is one of the most promising midfielders in the league. Smith has collected 25 or more disposals in five matches this season, including his blistering 36 against the Magpies in round one. The future superstar should see plenty of the footy again this weekend.

Without both Rowan Marshall and Paddy Ryder on the park, it is hard to see St Kilda winning this weekend. Tim Membrey will need to be the shining light up forward for the Saints during Max King’s horror form slump, while Bailey Smith will star in the midfield for the Dogs.