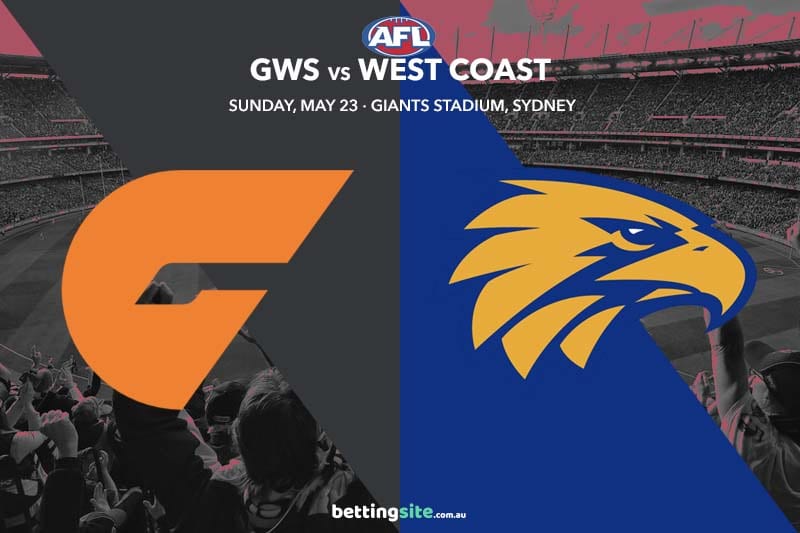 GWS is hurting after squandering a golden opportunity to beat the reigning champion, but all will be forgotten if they can upset West Coast in round 10 AFL action at Giants Stadium on Sunday afternoon.

The Giants are coming off a heartbreaking four-point loss against Richmond, after looking the superior team for most of the night. The Giants will be without stand-in captain Toby Greene (shoulder) and Harry Perryman (hamstring) until after their bye. But the Giants will be bolstered by the returns of Nick Haynes, Jeremy Finlayson and Sam Reid.

West Coast travel to Sydney for the first time this year on the back of a 24-point win over Adelaide in what was a workmanlike performance. The Eagles are set to regain Shannon Hurn and Liam Ryan from injury. There are injury concerns over Oscar Allen (arm) and Jeremy McGovern (leg) which could bring this match-up back to somewhat of an even playing field.

Online bookmakers have the Giants as $2.35 outsiders for Sunday’s clash, whilst West Coast are $1.62 to make it four wins on the bounce after a frustrating start to their season.

The loss of Greene could not have come at a worst time, as the Giants were making their case to play finals in 2021. Greene has kicked 22 goals to start the season, but it is what he does to get others involved they will miss. Returning to Giants Stadium is a boos and with Haynes, Finlayson and Reid returning they will make sure this is not a blowout and will enter this game expecting to win.

West Coast is one of the highest scoring teams and with the Giants undermanned defence, they could be set for a big day out. Kennedy, Darling and Allen combined for 11 goals against the Crows and could be set for a similar output.

It remains to be seen whether Leon Cameron sends Matthew Flynn and Kieran Briggs into the coalface against Nic Naitanui or calls upon Shane Mumford. Mumford has been tremendous in 2021 and the Giants are yet to taste defeat with him in their lineup. However West Coast ruck Nic Naitanui is a different challenge in itself. Naitanui averages 28 hitouts a game and gives his midfield elite first use each time. Unless the Giants can nullify his influence, it could be a long day.

In our opinion, the market has gotten this game completely wrong. The Giants have a massive injury list, and with the addition of Toby Greene and Harry Perryman it could reach breaking point. The Eagles come to Giants Stadium chasing their fourth win in a row, and they should be getting it done in fine fashion. Despite not having their first choice midfield, we are confident the Eagles have enough talent to cover the -7.5 line.

With Toby Greene on the sidelines, Daniel Lloyd will need to increase his output. He has kicked a goal in both of his games since returning from injury, and with more time in the forward-line expected he looks a prime candidate to kick 2+ goals. With close to $4 on offer for him to do so, it is value we are finding hard to ignore.

The Eagles come to Giants Stadium in fine form, and come up against an injury-ravaged Giants outfit this weekend. Led by their big key forwards we expect the Giants undermanned backline to struggle all day. We expect the Giants to not go down without a fight, but the Eagles should be too good for the GIants outfit over four quarters,