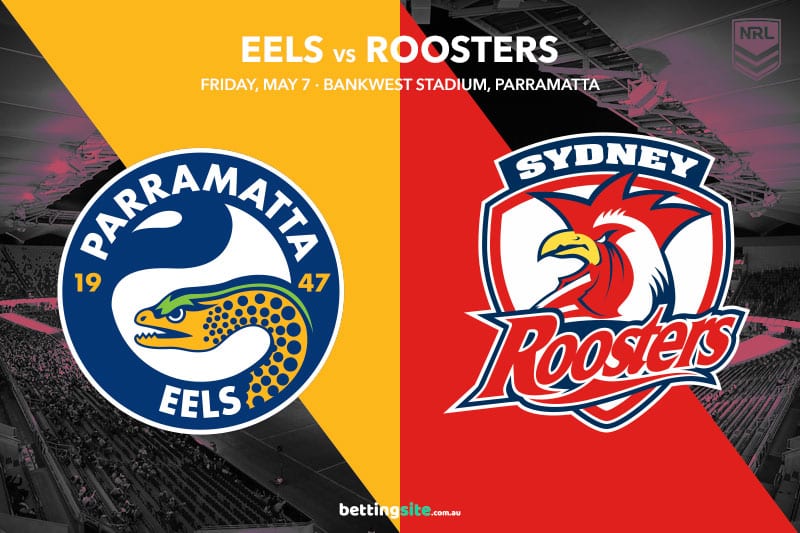 The heartbreaking loss of Brett Morris will be front of mind for the Sydney Roosters when they head to Bankwest Stadium for a Friday night NRL blockbuster against the Parramatta Eels. Just how the Roosters line up is a bit of a mystery and will remain that way through the week, while the Eels will be looking to win their fourth game in a row and are the $1.60 to win at home.

Parramatta have won their last three games by 20 or more points, but to think they’ll do the same to the Roosters, a team built on high character, is a combination of blind optimism and fool’s gold. For that reason, there is good value to be had on the Roosters as the underdog because of the experience they still have across their 17.

As with every Parramatta Eels game at Bankwest Stadium, Maika Sivo is going to get an enormous percentage of the money in the first tryscorer market, and you’d be crazy to not have an investment now Brett Morris isn’t marking him. Clint Gutherson will be among the heaviest backed to cross at any time, while Reed Mahoney and Isaiah Papali’i will provide terrific value for those who are looking at getting a big win. Punters should also be looking at the -3.5 line on Parramatta given their strong form in recent weeks.

Because of all their injuries, we might not know the Roosters’ 17 until moments before kickoff. They may be the outsider in this game, but to write them off completely is crazy. There is still plenty of talent in this football side still, and James Tedesco will return from a concussion layoff.

How much Sydney can play on emotion after the shocking scenes from Newcastle last weekend remains to be seen, but there will be plenty who still believe they can salute as the $2.38 outsider. Tedesco’s return will see him heavily backed to score a try, and we believe he should be in everyone’s multis, as should the brilliant Sam Walker, who is the talk of the competition.

Mitchell Moses may be playing the best football of his career, and it has many believing Parramatta are a genuine contender for the 2021 NRL Premiership, but how can anyone see what Sam Walker has done and not be impressed? The 18-year-old halfback has 12 try assists across five games and already has the Roosters record for assists in a single game. He performed admirably in their loss to the Storm, but against the Dragons and Knights he was untouchable. Will Moses get the points decision on the back of his improved kicking game, or will the flair of Walker prove too much for the Eels?

Everything says Parramatta should get the win, but we think the Roosters can get the upset. While losing a top-line prop and one of the game’s best wingers is hard to come back from in a week, the Roosters will win by six points thanks in large part to Trent Robinson and his ability to get the absolute best out of whoever wears the jersey.

Roosters head-to-head with James Tedesco and Sam Walker to both score tries pays a tasty $16 at Sportsbet.