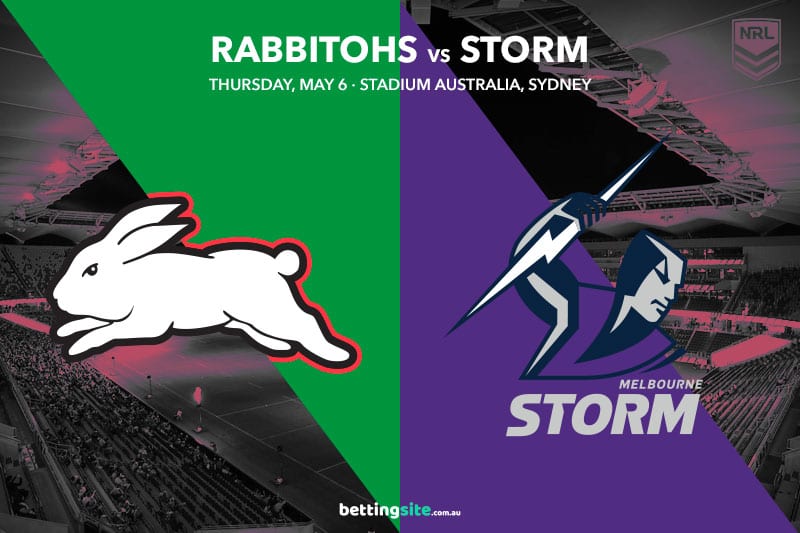 The Melbourne Storm will head north to take on the South Sydney Rabbitohs to kick off round nine of the 2021 NRL Premiership on Thursday evening. The Rabbitohs will be without Adam Reynolds, Cameron Murray, Latrell Mitchell and Campbell Graham, robbing fans of what would have been a hellacious contest if both teams were fully loaded. Melbourne have won five straight games after a difficult start to the season, and it’s seen all the money come their way at the $1.37 price. The Storm have only lost to South Sydney five times in their history, but all of those losses have come in the New South Wales capital, so is there reason to hold some hope for the Bunnies at the $3.20 quote?

South Sydney will still field a strong line-up this Thursday evening despite missing plenty of big names, but to beat Melbourne you need to have all of your horses available. The past three games has seen the Rabbitohs come roaring back in the second halves of their games, but the first 25 minutes could be crucial in this one. Even if they get out of the gates well, it might not be enough.

Taking Souths to lead at half-time and lose holds some appeal as they look to turn around their first-half fortunes. The +7.5 line also looks a little slim for them without their full complement of players. With Latrell Mitchell missing, Cody Walker and Alex Johnston have the most appeal in the tryscorer markets, but Keaon Koloamatangi as an outsider could be one to keep an eye on. He is a handful on the edge.

With South Sydney missing some key players, the -7.5 line for the Melbourne Storm is one the punters have to be all over at $1.90. The 13+ margin is only at $2.40, so you don’t get that much of a difference in price, and having only one try as the margin for error makes the line a much safer option.

The usual suspects will get plenty of money thrown their way in the tryscorer betting, and with no Campbell Graham at right centre for the Bunnies, it makes the duo of Josh Addo-Carr and Justin Olam impossible to ignore. Punters should consider combining the two in any multi bets.

The embarrassment of riches Melbourne have in the hooking department means they can bring Harry Grant off the bench as a weapon and have Brandon Smith hold the fort at the start of games. Damien Cook doesn’t have that luxury, and while he has been good so far in 2021, he hasn’t been quite at his devastating best. For Souths to win without Adam Reynolds, they need a big night from Cook, and how he keeps fresh to attack for a full 80 minutes is the exact thing the Storm will look to exploit. Wayne Bennett has seen it all, and he may have to look for a way to hide Cook in the defensive line to keep him effective.

Melbourne will win their sixth game in a row, but we can’t take too much out of it because of the injuries to Souths. Take the Storm at the line.

The Storm at the -7.5 handicap with Josh Addo-Carr and Justin Olam to cross at any time pays $5.25 at Sportsbet.